At the end of a holiday in Anglesey (lots of fantastic historical sites visited) I drove past the Trearddur Dolman and couldn't resist having a closer look.

And from the very helpful  http://www.themodernantiquarian.com/site/15704/trearddur.html

About a quarter of mile further on [from Trefignath ], near Trearddur farm, close to the road on the road on the right, there are the traces of a similar cromlech (now nearly obliterated), called Coetan Arthur. Near this spot, in 1837, a vessel containing a great many Roman copper coins was found, of the later emperors. I took them to the British Museum, but there was none peculiar; and I regret that they were purloined in transmission by post to the owner.

Coflein describes this site as having two stones, one upright and one recumbent, on a rocky rise. The official opinion is now that it could be a natural outcropping rather than a cromlech with the remains of a covering cairn. But they do say that "it is possible that the erect stone was raised deliberately, and it may be a prehistoric ritual or ceremonial monument." The upright stone is 1.6m high, 2.1m wide and 0.3m thick at its base. The prostrate stone at its foot is 2.3m long, 1.5m wide and 1m thick. 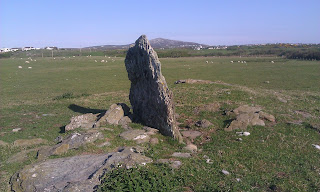 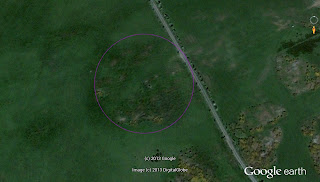 
But what struck me as I walked round the stone was how "henge" like the platform with its bank and stones on the edge felt. I have no evidence that this is anything other than a natural feature or the result of agricultural  activities but I think it is worth a second look. If you are in the area please let me know what you think.