STONEHENGE FOR THE ANCESTORS: PART 1
Landscape and Monuments
Mike Parker Pearson, Joshua Pollard, Colin Richards, Julian Thomas, Chris Tilley & Kate Welham | 2020
Within this book there is a discussion and diagrams of the Cart Tracks or Wheel-Ruts that were discovered within the Avenue at Stonehenge and that overlie the periglacial grooves.
Cart tracks should, I think, come in pairs which are the right width apart, and at first sight the figure doesn't show this: 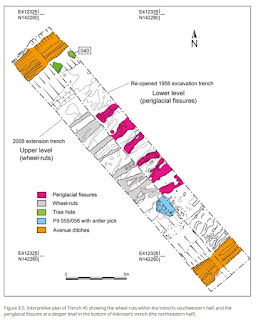 It appears they follow the lines of the fissures rather than being independent features. I can only presume the fissures are softer ground and so rut more.
The oft repeated myth that railway lines are the same width apart as carts and chariots wheels does have a bit of truth to it. The width of cart tracks will be between 1.2 and 2 metres with the usual width about 1.4 - 1.5m.
So do these features have these properties. On closer examination it seems that they do as I have tried to show with paired parallel lines. It isn't as clear as might be hoped for and some crushed stone in the bottom of the ruts would have been helpful.

A smooth flint disc, a pessoi?

I have written about the bluestone pebble found in Durrington which is fully reported in "Along Prehistoric Lines: Neolithic, Iron Age and Romano-British Activity in the Former MOD Headquarters, Durrington, Wiltshire" By Steve Thompson and Andrew B. Powell  Published by Wessex Archaeology, 2018 and summarised at https://www.wessexarch.co.uk/our-work/mod-durrington .

"A discoidal 'bluestone' object with heavily ground and flattened edges was found in the tertiary fill of the northern terminal of Romano British ditch 6256 (slot 5145), 7 m from the intersection of the two Late Neolithic posthole alignments (at posthole 5047). The object, which has a rounded trapezoid shape, is 64 mm wide, 67 mm long and 18 mm thick. It is made from a slab of stone that has developed a light grey surface patina, although a fresh break in one corner suggests a poorly developed conchoidal fracture and is a dark grey colour when freshly worked." 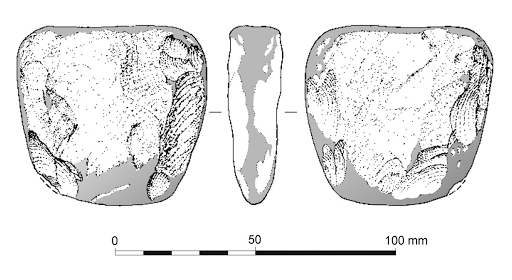 Elsewhere at Durrington in another Romao-British context there were found: "18 pottery disks clipped into roughly circular shapes. Suggestions for their use include spindlewhorl production, gaming counters or even ‘pessoi’ for cleaning after defecation."

The Durrington Bluestone is exactly the right shape, size and context to be one, I wonder whether this posh souvenir from Stonehenge was one?

As an update as I was walking the dogs on the path where occasionally I find a bit of Roman pottery I noticed with fresh eyes a flint disc. I have seen something similar before, it has a crudely worked edge which is smooth rather than either a cutting edge or a bashing edge as most flint tools are. 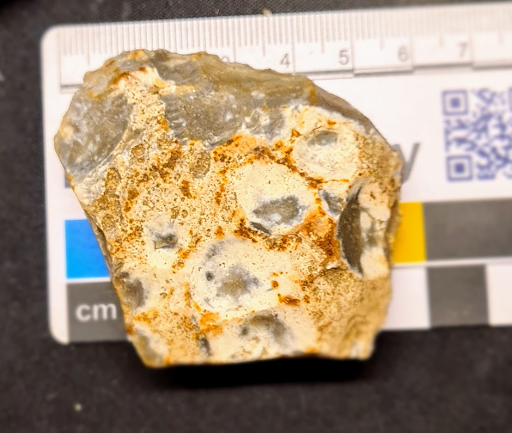 Embiggen
After a quick wash I couldn't resist some fundamental experimental archaeology. Not wishing to risk anything valuable I used some Marmite Peanut butter and my fist and as the Greeks had it three wipes with a stone are enough. 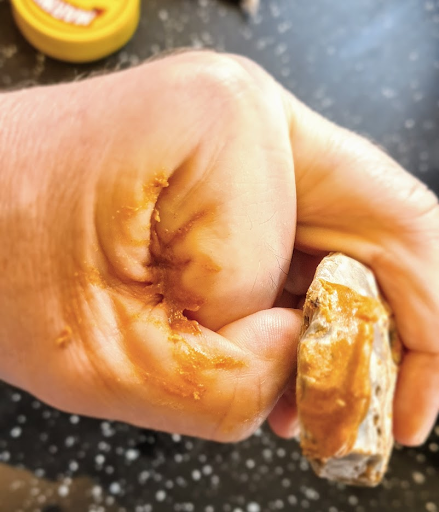 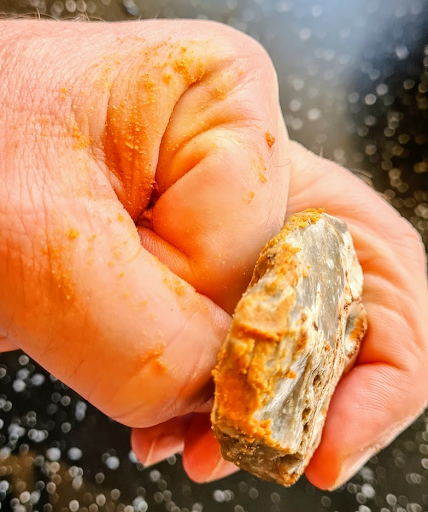 I am now wondering if many of these objects have not been recognised in collections. But it would be an odd hobby to take up looking for them..
Posted by Tim Daw at Wednesday, March 10, 2021 No comments: