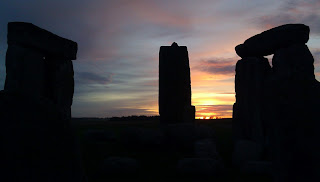 The celebration of the Winter Solstice at Stonehenge will take place at sunrise on Tuesday 22nd December 2015 (approximately 08:09 hrs).

English Heritage is offering ‘Managed Open Access’ for those who wish to celebrate the Winter Solstice Sunrise.

Visitors will be allowed into the Monument when it is considered sufficiently light to ensure safe access. Entry will be available from approximately 07:30 hrs until 09:00 hrs when visitors will be asked to vacate the site.

Public Transport is being provided by Salisbury Reds buses and will be running from 06:00 from Salisbury.

Parking is very limited. You will have to walk in the dark on uneven surfaces so be dressed and shod appropriately and bring a torch.

Many people will park on the Byway adjacent to the Monument field that runs from the A303 to Larkhill. The turn on to it and off it from the A303 is hazardous. DO NOT turn right either into it or out of it, Carry onto the next roundabout and turn there.

A limited number of permits will be available for blue badge disabled parking at the New Visitor Centre and there will be dedicated accessible transport to the stone circle - which will begin just prior to the opening of the monument field. Please apply to Sandra.Ross@english-heritage.org.uk

My paper on how the Great Trilithon aligns to the Winter Solstice Sunrise
Posted by Tim Daw at Wednesday, November 25, 2015 No comments:

How Many Stones or Rocks Does Stonehenge Have?

There are 93 rocks or lumps of stone visible at Stonehenge now - not counting the buried and missing ones. All the stones are numbered on standard plans, see below.

Note, if a numbered stone is broken and two separate bits or fragments of it are visible then it counts as two stones etc.

I have checked this on the ground, but errors may remain, please comment if you spot any.

Stone 40g is not counted because all that is visible is a lead cap.

How many stones did Stonehenge originally have is a different question.

There are five Sarsen Trilithons which gives fifteen large Sarsen stones.
The outer ring of Sarsens is planned to contain thirty uprights and thirty lintels so that is 75 worked sarsens in total.
There are four sarsens outside the centre, the two Station Stones, the Slaughter Stone and the Heel Stone.
There are stoneholes for other stones matching these, another two station stones, a matching Slaughter Stone and a paired hole to the Heel Stone. (There are other holes such as the F,G and H holes which maybe were stoneholes.) These empty holes may have held other stones or maybe stones that were then moved, for instance the Heel Stone may have originally occupied Stonehole 97. So that is between five and ten other sarsens.

There is the Altar Stone, origin unknown.

And lots of bluestones and bluestone holes. There are 29 bluestones that are still visible, but the original number is probably around 80. They have been shuffled around the holes so it is hard to be sure but that is a reasonable estimate.

So Stonehenge may have had up to 165 stones originally. It also had a vast number of stone fragments and hammerstones used for packing.

Where are the missing stones from Stonehenge?
We don't know.
There is broken up bluestone, known as debitage, all over the site. Is this from stones being broken up for tools and talismen or is it the remains of shaping the stones?
We know bits have been knocked off the edges of stones, greatly reducing them in some cases but complete stones carted off for use elsewhere have not been found despite searches. So it is another Stonehenge mystery.

(Note this is an updated post combining previous published posts into one.)


Stone 23 has several interesting surface treatments. At about shoulder height on the outside facing the path there is a highly polished area, quite different to any other stone surface in the monument. The enhanced picture shows it to the right. It looks like a polissoir area.

I think it predates the 19th century graffiti of Mr Senior but others aren't so sure.

As an aside I think the upper graffito is W.READ rather than WREN.
Posted by Tim Daw at Tuesday, November 24, 2015 No comments:

English Heritage didn't like me blogging about Stonehenge (amongst many other things they didn't like) so I have not been able to update this site properly for ages. But now I can, I just need to find the time to do so. 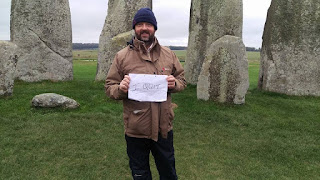 Durrington Walls Superhenge - Mike Parker Pearson; “The smart money is that the stones are not actually stones”

....Buried in the banks of Durrington Walls are about 90 standing stones, some up to 15 feet tall. Dr. Gaffney said there may originally have been 200, more than twice as many as at Stonehenge. “That tells you the scale of this thing,” he said.

If true, that would jumble Dr. Parker Pearson’s differentiation of Durrington Walls as the land of the living from Stonehenge, the land of the dead. But he is skeptical of the findings, which have not been published in a peer-reviewed journal.

He said that a decade ago, he excavated some of those locations and found post holes that had been capped with cemented chalk. The radar reflections had bounced off the chalk blocks, he said.

“The smart money is that the stones are not actually stones,” Dr. Parker Pearson said. He said he and Dr. Gaffney had discussed their differing interpretations. “We’ll dig a hole next year to resolve the issue once and for all,” he said.....

The horrible phrase Ground Truthing is apt, I can't wait to find out.
Posted by Tim Daw at Tuesday, November 10, 2015 2 comments: