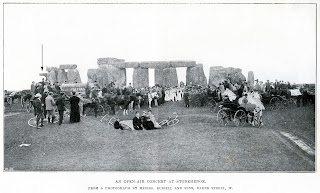 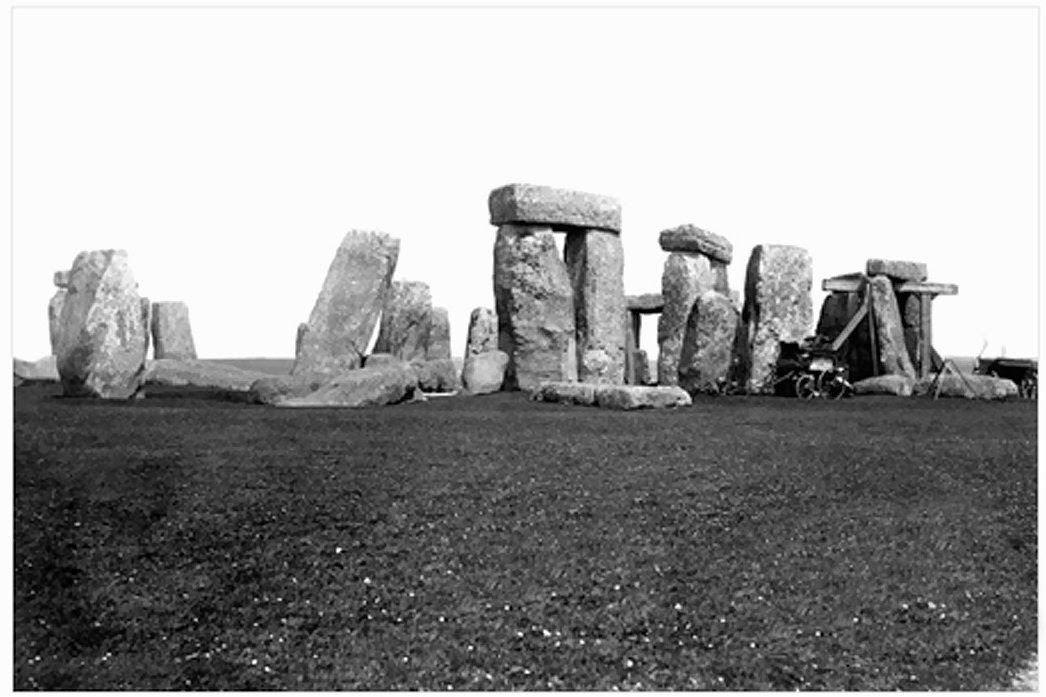 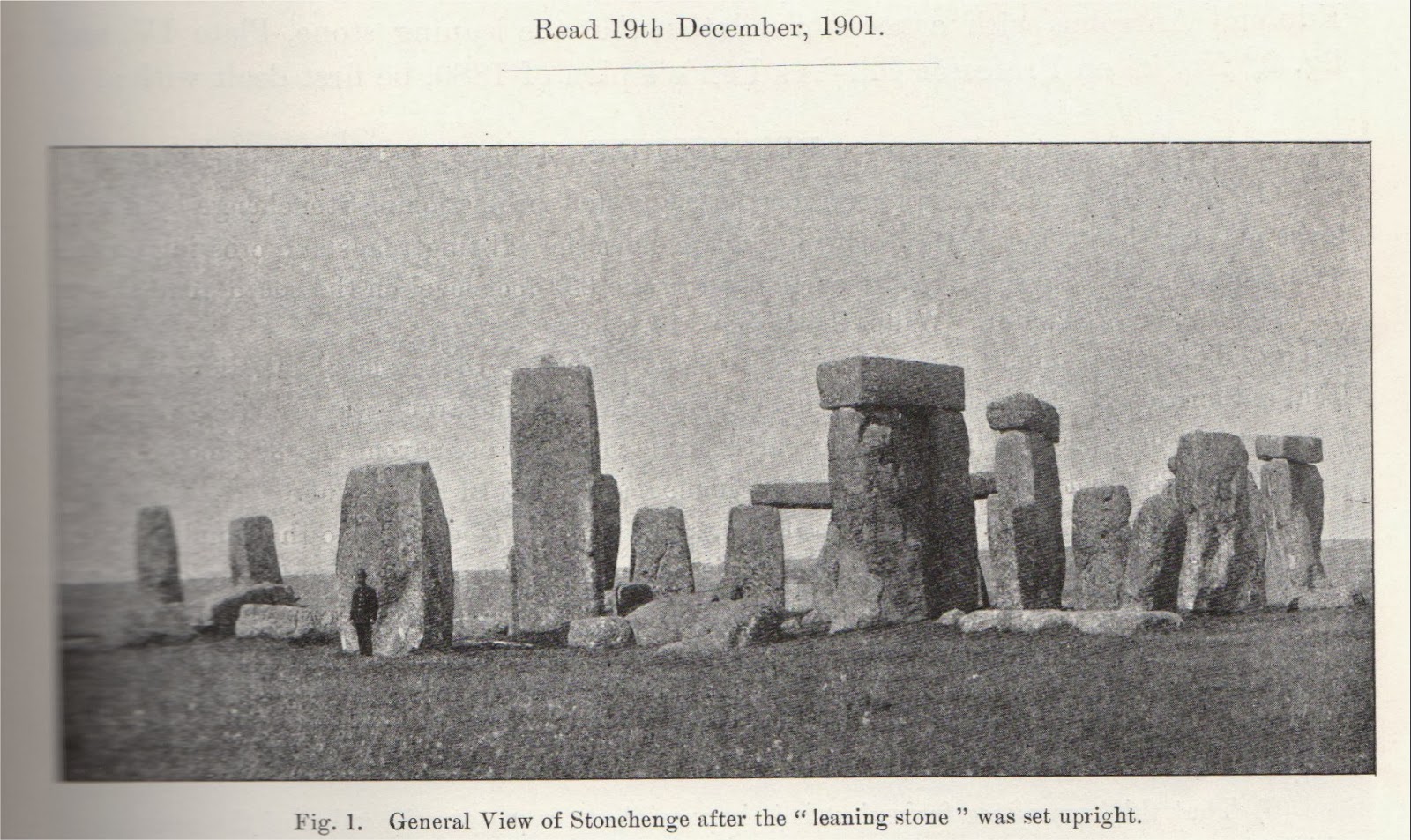 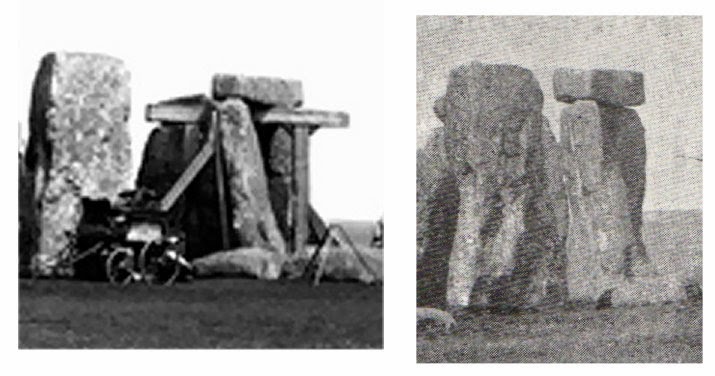 J J Cole was Antrobus's architect according to Rosemary Hill's Stonehenge and it was his suggestion that the monument was made safe rather than restored, and that work done was obvious. A very modern and enlightened view.
Posted by Tim Daw at Monday, January 27, 2014 No comments:

I have been trying to find a picture of the wooden strut - two legs and a cross piece that was erected under the lintel of the Stones 6 & 7 trilithon for some time, having just glimpsed it in a view from the North East taken in, I think, the 1890s.

And then two turn up this week. Photo of Stonehenge, 1887 - Francis Frith has one as well.

By the time of Sharpe's Aerial photograph 1906 it has been removed. 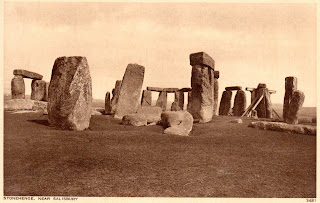 I noticed today that as part of the demolition leading to the renaturing of the old Stonehenge carpark that a trench had been dug that I could see into.

Obviously surrounded by safety barriers but the section seems to show ridges of chalk interspersed with clay filled dips in the subsoil. Looks like classic chalkland periglacial stripes at this casual glance.

According to Cleal et al Wessex Archaeology found periglacial stripes near to this spot in 1988-89 but the report on the dig remains unpublished. 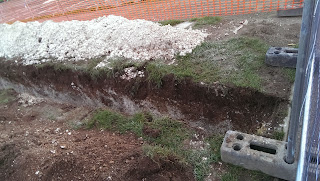 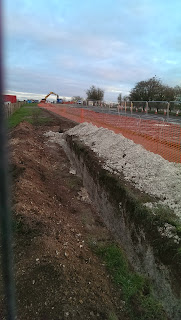 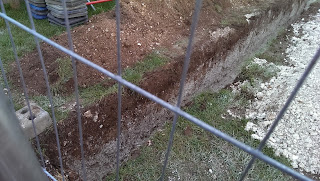 My construction of a working Long Barrow at All Cannings is going full tilt, which is involving a lot of press interviews as well as other work.

Pop over to the website www.thelongbarrow.com or the facebook page for more info .
Posted by Tim Daw at Tuesday, January 14, 2014 No comments:

A Further Neolithic Monumental Mound by the River Kennet

A Ground Penetrating Radar (GPR) survey was conducted over a circular earthwork enclosure, known as Priddy Circle 1, one of a group of four similar scheduled monuments on the upland Mendip plateau close to the village of Priddy, Somerset. Following extensive levelling of the earth works and the subsequent prosecution of the landowner through the Ancient Monuments Act, a programme of mitigation work was agreed, including geophysical survey in advance of evaluation excavations to recover information and offset the impact of the damage. The site was surveyed using a vehicle towed, multielement air-launched GPR array to provide high sample density coverage of the monument to complement fluxgate gradiometer coverage commissioned separately. Due to concerns over the signal penetration achieved in the field by the air launched array a comparative area over the damaged earth work was also conducted with a ground coupled impulse GPR system, using a 450MHz centre frequency antenna.

Archaeologists are gaining a new perspective on why ancient Britons erected great henge and circle monuments like Stonehenge. Recent studies emphasize how the work of building monuments brought geographically dispersed communities together. Surprisingly, the stone circles were part of a package of innovation that began in Scotland's far northern Orkney Islands and later spread south to transform the British landscape.

This from our parch mark investigations this summer.
Posted by Tim Daw at Wednesday, January 01, 2014 3 comments:

Darvill and Wainright in Current Archaeology

Bluestones and Stonehenge - Major feature in this month's Current Archaeology. Link will be added when available.
Posted by Tim Daw at Wednesday, January 01, 2014 15 comments: