A very detailed look at the Bluestone quarries and the associated stone tools discovered there.

Abstract: Excavations at two of the sources of Stonehenge’s bluestones in Mynydd Preseli, west Wales, have led to the discovery of stone tools associated with megalith quarrying in the final centuries of the fourth millennium BC, shortly before the suspected date of the bluestones’ erection at Stonehenge, 240 km away. Among the most plentiful of these tools are stone wedges, three of which were found in situ at the rhyolite bluestone quarry of Craig Rhos-y-felin. Two of these were positioned in the joints of a rhyolite pillar adjacent to a recess left by a removed pillar. Geochemical analysis reveals that these and the third wedge are of compositions different to the rock on either side of the cracks into which they had been driven, confirming their identification as quarrying tools. This research sheds new light on the methods used to extract the stones for Stonehenge. 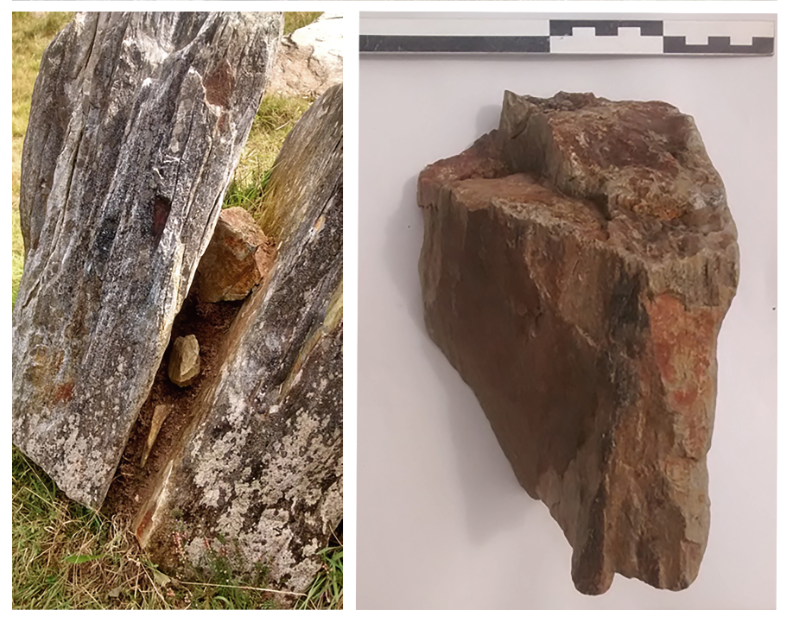 Mythical rings? Waun Mawn and Stonehenge by Timothy Darvill and the response!

"In a recent Antiquity article, Parker Pearson and colleagues (2021) presented results from excavations at Waun Mawn in south-west Wales, interpreting the site as a dismantled stone circle and source for some of the Bluestone pillars used in the Aubrey Holes at Stonehenge. Here, the author examines the evidence, showing that alternative interpretations are possible. Waun Mawn is argued to represent a series of smaller stone settings, typical of ceremonial sites in south- west Wales. Meanwhile the Aubrey Holes are shown to reﬂect a well-established regional sequence in which post circles are followed by pit circles. A Welsh ‘source-circle’ for Stonehenge cannot be excluded but, the author argues, the claim is unsupported by the current evidence."

The full article is at : https://doi.org/10.15184/aqy.2022.82
Mike Parker Pearson et al have responded:
How Waun Mawn stone circle was designed and built, and when the Bluestones arrived at Stonehenge: a response to Darvill
"In response to Timothy Darvill's article, ‘Mythical rings?’ (this issue), which argues for an alternative interpretation of Waun Mawn circle and its relationship with Stonehenge, Parker Pearson and colleagues report new evidence from the Welsh site and elaborate on aspects of their original argument. The discovery of a hearth at the centre of the circle, as well as further features around its circumference, reinforces the authors’ original interpretation. The authors explore the evidence for the construction sequence, which was abandoned before the completion of the monument. Contesting Darvill's argument that the Aubrey Holes at Stonehenge originally held posts, the authors reassert their interpretation of this circle of cut features as Bluestone settings."
The response is at:  https://doi.org/10.15184/aqy.2022.132 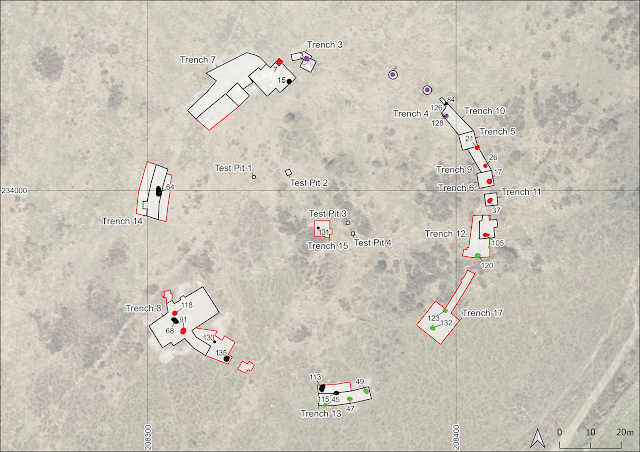 Plan of the unfinished and dismantled stone circle of Waun Mawn, Pembrokeshire. Remaining stones, standing and recumbent (purple), are shown, with stoneholes of dismantled standing stones (red), pits dug for standing stones but never used (green) and other features (black). Viewed from the hearth (131) at the centre of the circle, the midsummer solstice sun rose within the entrance formed by stoneholes 128 and 21 (figure by C. Casswell)
Posted by Tim Daw at Friday, November 04, 2022 No comments: