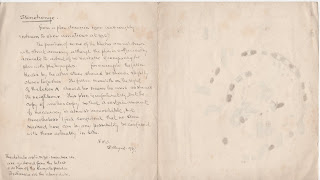 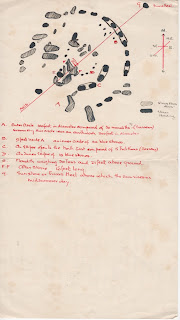 Found in amongst my Stonehenge Ephemera.


Everyone should do it once, but if you have been before I wouldn't bother this year, I won't.  I don't like the increased hassle and the plastic people.

Stonehenge is an ancient prehistoric site which may have been a place of worship and celebration at the time of Summer Solstice for thousands of years and is seen by many as a sacred site.

Please note that the site will close at 15:00 on Tuesday 20 June with last normal day admissions at 13:00, so that we can prepare for Summer Solstice Managed Open Access. Stonehenge is closed on Wednesday 21 June and will re-open at 09:00 on Thursday 22 June.

English Heritage is pleased to provide free Managed Open Access to Stonehenge for Summer solstice 2017 and ask that if you are planning to join us for this peaceful and special occasion that you read the Conditions of Entry and the information provided on the following pages before deciding whether to come. These are written to ensure enjoyment and safety for everyone attending summer solstice at Stonehenge.

Please note to reduce risk to those attending and to the monument itself, alcohol is not allowed in the monument field during summer solstice.

Admission to the Summer Solstice at Stonehenge is free of charge.

Parking is limited and charges apply (see Travelling to Solstice for details). We strongly recommend travelling by public transport or arranging to car share with friends or through Liftshare .

For further details and information to help you plan your journey, including details of local accommodation and other helpful advice for Summer Solstice at Stonehenge, follow links below.

Travelling to Solstice
Facilities, safety and welfare
What (and what not) to bring
Posted by Tim Daw at Tuesday, May 30, 2017 3 comments:

The estate of Amesbury, including the land on which Stonehenge stood, and
roughly equating to the modern day parish of Amesbury, was a royal estate
from the early medieval period (since the time of King Alfred (d.899)). It
stayed with the Crown until the 1140s, after which it was then granted to
various royal followers, including the Earls of Salisbury and later the
Earls of Warwick. At the time of the dissolution (between 1536 and 1541),
the 200,000 acre estate, including the nunnery of Amesbury Abbey, was
gifted by Henry VIII to the Duke of Somerset, Sir Edward Seymour.

The Amesbury estate was owned by several generations of the Seymour
family, until 1676 when it was passed by marriage to Thomas Bruce, Earl of
Ailesbury. His son Charles Bruce sold it in 1720 to his cousin Henry
Boyle, Lord Carleton (d.1725) who gave it to his nephew Charles Douglas,
Duke of Queensbury (d.1778). The manor passed in 1778 with the dukedom to
his kinsman Archibald Douglas, Lord Douglas, and in 1825 he sold it to Sir
Edmund Atrobus (d.1826). It descended with the baronetcy to Sir Edmund’s
nephew Sir Edmund Antrobus (d.1870), to his son Sir Edmund (d.1899) and in
turn to his son Sir Edmund (d.1915).

In 1901 the last of these, Sir Edmund Antrobus, 3rd Baronet, enclosed
approximately 20 acres around Stonehenge and began to charge for
admission: his right to do this was confirmed by the High Court in 1905.

In the opening months of World War I, Edmund was killed serving in the
Grenadier Guards and his uncle, Sir Cosmo, decided to sell the estate. The
sale was put into the hands of Messers Knight, Frank and Rutley and lot 15
was ‘Stonehenge with about 30 acres, 2 rods, 37 perches of adjoining
downland’. Cecil Chubb's interest in the local area led to him attending
the sale, which took place at the Palace Theatre, Salisbury on the 21st
September 1915. Apparently he went with instructions from his wife to
purchase some chairs. He had no intention of bidding, but in his own
words: "while I was in the room I thought a Salisbury man ought to buy it
and that is how it was done". Stonehenge cost him £6,600 (about £392,000
today). After the bidding Cecil admitted that he put his hand up on
impulse.

Cecil Chubb remained its owner for three years and then, on the 26th
October 1918, he formally handed it over to Sir Alfred Mond, the First
Commissioner of Works, who received it as a gift on behalf of the nation.
The deed of gift included several conditions or covenants:
1. First that the public shall have free access to the premises hereby conveyed and Every part thereof on the payment of such reasonable sum per head not exceeding one shilling for each visit and subject to such conditions as the Commissioners of Works in the exercise and execution of their statutory powers and duties may from time to time impose.

2. Secondly that the premises shall so far as possible maintained in their present condition.

3. Thirdly that no building or erection other than a pay box similar to the Pay Box now standing on the premises shall be erected on any part of the premises within four hundred yards of The Milestone marked “Amesbury 2” on the northern frontage of the premises and Fourthly that the Commissioners of Works will at all times save harmless and keep indemnified the Donors and each of them their and each of their estates an effects from and against all proceedings costs claims and expenses on account of any breach or non observance of the covenants by the Donors to the like or similar effect contained in the Conveyance of the premises to the Donors Dated the thirty first day of December One thousand nine hundred and fifteen In witness whereof the Donors have hereunto set their hands and seals and the Commissioners of Works have caused their Common Seal to be affixed the day and year first above written.

The 1918 Deed of Gift did not specify free access for local residents, but
at that time public rights of way passed very close to the Stones. These
proved inconvenient to the management of the site, and in 1921 the
Commissioners of Works sought to address this. An agreement was reached
that the rights of way would be diverted further from the stone circle,
outside of the fenced area, on the basis that residents of the then
Amesbury Rural District and Parish of Netheravon would be granted the
right of free access to the monument.

A resolution was passed by Amesbury Parish Council on the 12th April 1921
stating that:

“… the Council relinquishes all claims on the right of way now enclosed,
on condition that all householders and their families, (or all
inhabitants) of the parishes, comprising the Rural District of Amesbury,
and the householders and their families (or inhabitants) of the Parish of
Netheravon, be granted free admission to Stonehenge at all times. Subject
to the usual rules and regulations made by the Board for the proper
management of Stonehenge as an Ancient Monument.”

The agreement for free local access has continued to the present day. The
Parish of Netheravon still exists, but Amesbury Rural District disappeared
in the 1974 local government reorganisation. The agreement is accordingly
taken to apply to all inhabitants of those parishes which were within the
former rural district council area.

These areas (which currently account for just over 30,000 residents) are
as follows:

• The Town Council of Amesbury;

Local resident’s passes can be picked up at Durrington Town Hall and
Amesbury Library, on production of two forms of ID.