The Bath and Camerton Archaeological Society has published many reports on Stanton Drew (amongst other reports) including the most recent investigation into the Big Mound there. It was thought (hoped) it might be a Silbury like artificial one, it seems it is just a natural feature.

These reports are available from http://www.bacas.org.uk/publications.shtml

Valley of the Stones - Observations of Possible Megalithic Structures in the Valley of Stones, Dorset

Many past copies of the WAHNS annual publication are available online


A couple of examples:

and:
From 1865 an investigation into how to move the stones.

64 people to carry an object that approximates to the weight of a bluestone.. 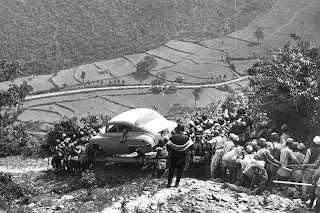 Where the missing Sarsens went?

One of the mysteries of Stonehenge is what happened tothe missing Sarsens. Assuming it was complete somewhere in the order of 300 tonnes of sarsen stone is miising. Apart from the edge damage caused by visitors it seems that complete stones were removed and that they were chosen from within the monument for some reason. Why take that lintel but leave the easier to remove fallen stone here? The stones don't seem to be present in any local buildings and it seems to odd to suggest they were broken up for roadstone when the easier pickings of the bluestones don't seem to have been so.

Julian Richards has suggested that one reason that sarsens were removed was for the stone to be used for producing grinding querns. There is very little stone in neighborhood suitable for stones to grind grain with and some sarsen stone types are very suitable, other less so. So a source of excellent source material may have been irresistible in the later Bronze Age, and a quern manufactory set up.

"East of (north Fargo) plantation the field system corresponds with an area of later Bronze Age activity identified by extensive surface collection in the winter of 1980-81 and subsequently sampled more intensively (Richards, J 1990 The Stonehenge Environs Project. HBMC: London ). The surface scatter consisted of pottery and large quantities of burnt flint and burnt and broken sarsen, including quern fragments, and was interpreted as a small nucleated area of later Bronze Age settlement, lying within the area of regular field"

This article considers the interpretation of stone and wood in Neolithic chambered tomb architecture in Britain and Ireland. Against a broader theoretical agenda of both relational materialities and animistic ontologies, it is argued that... more

Download (.pdf)
161
This article considers the long-debated and thorny issue of the transition from the Mesolithic to the Neolithic in Britain. The apparently polarised debate that has dominated this discussion is, we suggest, unhelpful, and rather than... more

Download (.pdf)
21
This paper considers some possible avenues for new research into the study of lithics for British and Irish assemblages dating from the Mesolithic and Neolithic. While scholars have been successful in extracting detail on technological... more
183
One of the big unanswered questions is whether the start of the Neolithic in Britain and Ireland saw the arrival of a new population, bringing with them new forms of material culture from the continent, or whether native hunter-gatherers... more

TITLE: Cummings, V. 2002b. Experiencing texture and touch in the British Neolithic. Oxford Journal of Archaeology 21:3, 249-61.

TITLE: Cummings, V., Jones, A. and Watson, A. 2002. In between places: axial symmetry and divided space in the monuments of the Black Mountains, south-east Wales. Cambridge Archaeological Journal 12:1, 57-70.

TITLE: From cairn to cemetery: an archaeological investigation of the chambered cairns and early Bronze Age mortuary deposits at Cairnderry and Bargrennan White Cairn, south-west Scotland. With Chris Fowler.

Mapping the Neolithic Spread by Genetics

Two excellent reports have just been released by English Heritage - go get 'em!

The Stones of Stonehenge - The Guide.

http://www.stonesofstonehenge.org.uk/ - A site with a page devoted to each stone at Stonehenge.

A must bookmark for all scholars of the stones.