Tess asleep on the stone at Stonehenge Summer Solstice 2013 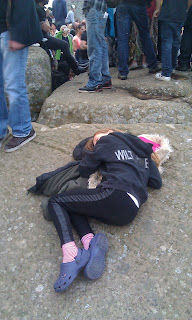 "When they saw where she lay, which they had not done till then, they showed no objection, and stood watching her, as still as the pillars around. He went to the stone and bent over her, hold one poor little hand; her breathing now was quick and small, like that of a lesser creature than a woman. All waited in the growing light, their faces and hands as if they were silvered, the remainder of their figures dark, the stones glistening green-gray, the Plain still a mass of shade. Soon the light was strong, and a ray shone upon her unconscious form, peering under her eyelids and waking her." - Thomas Hardy's Tess of the "D'Urbervilles 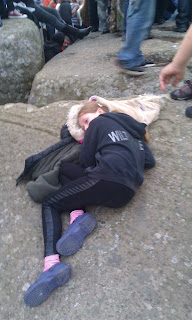