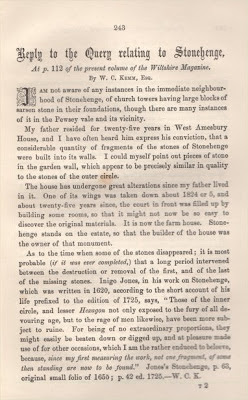 I AM not aware of any instances in the immediate neighbourhood of Stonehenge, of church towers having large blocks of sarsen stone in their foundations, though there are many instances of it in the Pewsey vale and its vicinity.
My father resided for twenty-five years in West Amesbury House, and I have often heard him express his conviction, that a considerable quantity of fragments of the stones of Stonehenge were built into its walls. I could myself point out pieces of stone in the garden wall, which appear to be precisely similar in quality to the stones of the outer circle.
The house has undergone great alterations since my father lived in it. One of its wings was taken down about 1824 or 5, and about twenty-five years since, the court in front was filled up by building some rooms, so that it might not now be so easy to discover the original materials. It is now the farm house. Stonehenge stands on the estate, so that the builder of the house was the owner of that monument.
As to the time when some of the stones disappeared; it is most probable (if it was ever completed,) that a long period intervened between the destruction or removal of the first, and of the last of the missing stones. Inigo Jones, in his work on Stonehenge, which was written in 1620, according to the short account of his life prefixed to the edition of 1725, says, “Those of the inner circle, and lesser Hexagon not only exposed to the fury of all devouring age, but to the rage of men likewise, have been more subject to ruine. For being of no extraordinary proportions they might easily be beaten down or digged up, and at pleasure made use of for other occasions, which I am the rather enduced to believe, since my first measuring the work, not one fragment ,of some of then standing are now to be found.” Jones’s Stonehenge, p. 63, original small folio of 1655; p. 42 ed. 1725.—W. C. K..