Atkinson in his book "Stonehenge" says the following:

Several writers on Stonehenge in the eighteenth and nineteenth centuries express a belief in the former existence of stone just inside the bank on the south—west side,  neighbourhood of Aubrey Hole 28, which would marked the prolongation of the axis, and incidentally the approximate point of midwinter sunset. No one has ever seen this stone, though Mr. W. A. Judd, one of the leading nineteenth-century authorities on the lithology of Stonehenge, reported that he had found its stump ‘still in the earth, about a foot under the surface’. A later search made with a sword and an auger by the then owner of Stonehenge failed to confirm this claim, and the existence of this stone must remain problematical.

When I went to work yesterday morning the pixies had re-created the missing stone - magical! 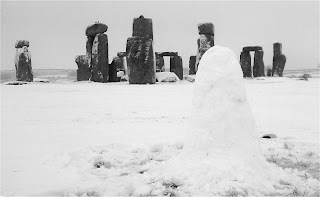