The modelling results have recreated a palaeohydrology for the Avebury and Silbury area and indicate that there was a wetter climate in the area. This would have generated higher river flows and most importantly higher groundwater levels, which would have sustained the local populations through dry summers. Also, the raised water table would have ensured waterlogged ground in places, which when coupled with increased vegetation and tree cover would have provided a more sustainable environment and better soils for crops in the area. Thus the study indicates that there would have been wetter and warmer conditions in 4000-4500BP 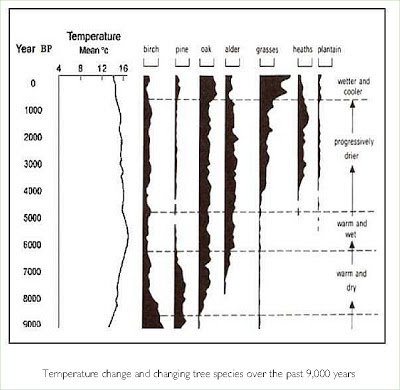 Interestingly, the changes predicted for the 4000-4500BP period by the Bridge CGM are actually quite similar to the predictions of future climate change in the UK (Wilby et al 2006), which implies that we are moving back to a 4000-4500BP climate in the UK.

Of course this is around the period when the Sarsen stones are presumed to have been transported from the Marlborough Downs nearby and across the Kennet to Stonehenge. Can we please not mention sliding them on ice down the frozen Avon again; that theory is just not compatible with the climatic evidence.
Posted by Tim Daw at Sunday, January 06, 2013