The Sarsens of Stonehenge: The Problem of Their Transportation


Route.—-In the only study of the transportation problem to date, Atkinson (1956) suggested that the Stonehenge sarsens originated on the Marlborough Downs because the largest outcrops occur there today. According to him, selected sarsens were dragged to Avebury, “blessed”, then dragged one at a time on sledges over hardwood rollers to Stonehenge. To avoid the steep descent of the Chalk escarpment Atkinson swings his route westwards to cross the Vale of Pewsey at its narrowest point (Fig. i).
Using this route Atkinson (1956, p. 115) calculated that the eighty-one sarsen stones were moved one at a time, at an average speed of half a mile a day and the task occupied 1500 men for ten years. Later he suggested that the minimum hauling party for the heaviest stone would be 100 men, increased to 450 up Redhorn Hill (written communication, 1958). These figures are for the haulers only and do not include the additional men required to shift the rollers and steer the sledge.
Despite the advantages there are six objections to Atkinson’s route. (i) The labour requirements are large. (ii) The route is 4 miles longer than necessary. (iii) A surprising number of sarsens outcrop south of the Kennet—many admittedly are smaller than those on the Marlborough Downs, but this may simply mean that the larger stones have been removed. (iv) Avebury does not lie on the direct route to Stonehenge. (v) It would be easier to have the stones blessed in situ. (vi) The ascent of Redhorn Hill is unnatural, unnecessary, and more than negates any advantage of the detour.

A possible alternative route, based on field work undertaken during 1958, is suggested (below). It has the following advantages: it is shorter than Atkinson’s route and is essentially downhill for 17 of its 21 miles. It would account for the pebbles of opalescent quartz found in some of the Stonehenge sarsens, because opalescent quartz is found in sarsen outcrops at Lockeridge (oral communication from R. J. C. Atkinson, 1956) which is en route. It also connects with the Avenue at Arnesbury and there is thus no need to explain how the sarsens were dragged across the Avenue. This alternative route may be divided into five stages. (i). A steady but gentle climb for 3 miles from Lockeridge (500 feet) to the saddle (708 feet) between Walker’s and Knap Hills, with a possible subsidiary route at Huish. (ii). A slide or slides down the chalk escarpment. (iii). The crossing of the Vale of Pewsey. (iv). The journey down the Avon valley. (y). The journey up the Avenue from Amesbury. For the moment, with the exception of stage (ii), we may assume that the stones were hauled in the “conventional” manner on sledges over wooden rollers......

...The free slide invoked for stage (ii) is the easiest, fastest and safest way of lowering the sarsens the necessary 150 feet. The actual positions of the slides are conjectural. The ones shown are thought to be the most likely. They are the steepest and the short est and are the nearest to the gaps through the Downs. They are sheltered from the westerly winds and are also partly sheltered from the sun. The slides may have been over snow, grass or bare chalk and the sarsens may have been slid downhill on their sledges, or they may have been tipped off and slid downhill on their own to accumulate at the bottom to await the next stage of their journey. Along the Avon valley, stage (iv), the route would lie east of the river to avoid the two tributaries. If the depth of water were the same as today (2 feet) the stones could not have been floated, they must have been dragged and at places, to avoid river bluffs, they may have been dragged through the water. The number of river crossings is unknown; meanders may have changed position. On the basis of today’s positions, only one or two crossings are necessary. The idea that the stones might have accumulated at staging points is logistically attractive. Each stage of the route presents special problems and each, for maximum efficiency, might have been the responsibility of one group of workers. Eating and sleeping arrangements would be simplified, and the distance that each group would have to travel would be reduced.

Climate.—The reasoning so far has assumed that the climate and vegetation in 1500 b.c. were essentially the same as today. Climates, however, have changed repeatedly in the past and are changing today. .....

Conclusions.—Whether the sarsens were hauled over rollers or sledded over snow or slush, the route postulated with a slide or slides down the chalk escarpment appears to be the easiest and most logical. The suggestion that the accumulation of snow was greater at the time the sarsens were moved cannot be proved—but it cannot be disproved. 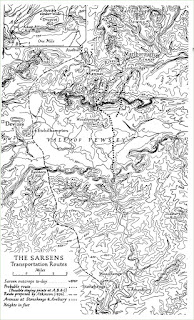 (Click for larger)
Hill was correct to challenge Atkinson's route for the reasons he gave. But he missed the largest problem with Atkinson's route, it crosses the Vale of Pewsey through a marsh and over an unnecessary hill.
Hill worries too much about the difficulty of pulling a large sledged weight across dry ground. More recent research by Julian Richards and Mark Whitby (1997) showed that a 40 tonne stone on a sledge on a greased track could be moved up a 1 in 20 slope by 130 individuals. His suggestions of ice tracks and packed snow are not supported by climatic data nor are they needed for practical reasons.
His route from the base of the Marlborough Downs and down the Avon Valley is problematical. He admits the water is too shallow to float the stones, and the Vale and river valley would have been a swamp before the river was canalised. A swamp with trees is not an easy route.
The route I suggested in The Origin Of The Stonehenge Sarsens leaflet minimises all theses problems and takes the most practical aspects of Atkinson's and Hill's routes.
It follows Hill's route across the Marlborough Downs, though I think the stones would have been brought down the gentle routes above Alton Barnes and Stanton St Bernard rather than launched over the steepest slopes. It then follows the narrow watershed between two branches of the River Avon to Marden Henge (where any blessing could take place - pace Atkinson) where the river is the narrowest and easiest place to cross, and the least marshland has to be crossed of any point in the Vale.
It then goes up the escarpment at Chirton Maggot, or one of the other similar benign slopes before joining Atkinson's route across the Plain. 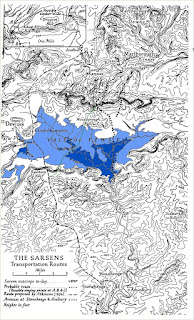 A modified map showing the three routes and land below 400 and 350ft contours.
Posted by Tim Daw at Tuesday, January 29, 2013