With the ongoing discovery of Mesolithic finds just south of the A303 here I thought it interesting.
Much more of course in the full paper.

With more news of David Jacques' fantastic Mesolothic finds at Blick Mead near Vespasian's Camp I thought it worthwhile adding a diagrammatic map showing his finds and these earlier ones. 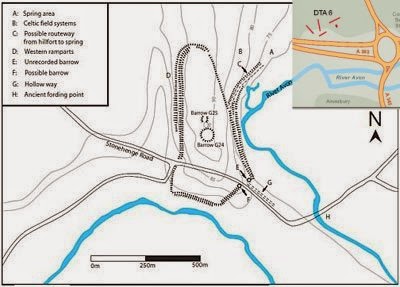 Archaeology on the A303 Stonehenge Improvement

The Early Mesolithic saw the transition from a largely
open late glacial landscape to one dominated by forest.
Pollen evidence for this period comes from sediments
within the Avon valley adjacent to Durrington Walls in
the north-eastern corner of the WHS (Cleal et al. 2004),
the basal deposits of which were radiocarbon dated to
c. 8280–7200 cal. BC (8640±200 BP; GU-3239).
This indicated a forested landscape dominated by pine
woodland with birch, hazel, oak, and elm colonising a
landscape previously dominated by herbs, grasses, and
reeds. This pine woodland was itself gradually replaced,
almost certainly during the course of the Mesolithic, by
hazel and incoming oak and elm (Scaife 2004).
Little direct evidence for Mesolithic hunter-gatherer
activity has been forthcoming from the region.
Excavations in the visitors’ car park at Stonehenge
provided confirmation of human activity in the
landscape during the Early Mesolithic (Allen 1995)......
Late Mesolithic activity (c. 6000–4000 BC) in the
Stonehenge region is almost unknown. Approximately
30 artefacts are recorded by Wymer (1977), although
there is some doubt over the chronological significance
of some of these (Allen 1995). Incontrovertibly
Mesolithic pieces include five tranchet axes and a
smaller number of perforated mace heads (Darvill
2005). Understandings of the environment are little
better: in 1995 Allen wrote that ‘nowhere in the
sequence is the Atlantic (late Mesolithic) represented’
(Allen 1995, 62)......
In this light, the recovery of Late Mesolithic
flintwork with good contextual associations from the
A303 Stonehenge Improvements is very important.The
material was recovered from trial trenches and test pits
at Drainage Treatment Area (DTA) 6, west of Countess
Farm, Amesbury, in Area V (Figs 6 and 7). The site lay
on the lower slopes of the valley side at the back of the
higher floodplain of the River Avon, in an area of
mapped calcareous gley alluvial soils (Frome 1 soil
association) on chalky and gravelly river alluvium.... 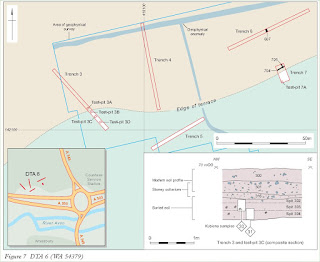 Situated towards the western limits of the site,Trench 3
was orientated approximately north-west to south-east
across the terrace edge (Fig. 7). In the northern half of
the trench modern soils directly overlay weathered chalk
or coombe deposits, whilst to the south a c. 0.25 m-deep
reddish-brown buried soil was revealed, containing
quantities of Late Mesolithic worked flint, and formed
on alluvial sediments deposited during overbank
flooding episodes. A series of four 1 m² hand dug test
pits, numbered 3A–D from north to south, was
excavated through this soil to establish the northern and
southern limits of the flint scatter (Fig. 7). The test pits
were excavated in 150 mm spits in order to record a
vertical profile of the flint scatter, and in one pit (3C)
the buried soil was sampled for micromorphological
analysis. The same sequence was also sampled and
assessed for pollen but counts were insufficient to
enable any statistically reliable interpretations.

A total of 226 pieces of worked flint and 180 fragments
of burnt unworked flint (3425 g) was recovered. The
flint scatter was found to be confined predominantly
within the relict soil just off the terrace edge (test pits
3B, 3C and 3D); it did not extend onto the terrace edge
itself (test pit 3A).Worked and burnt flint was recovered
throughout the depth of the soil, although greater
numbers of worked flint were present within the
uppermost spits, notably in test pit 3C; worked flint was
also recovered from overlying and underlying colluvial
layers.

The raw material comprises locally available chalk flint.
The condition of the material is mostly very good, with
little or no edge damage; cortication is light or absent. A
little possible usewear was noted on one flake. Twelve
pieces of worked flint were burnt and a little burnt
unworked flint was also recovered. The majority of the
burnt flint (both worked and unworked) came from test
pits 3B–D. Some material is in less fresh condition, with
rolling and edge abrasion apparent (eg, from overlying
colluvium and topsoil). Here cortication is more
variable; the flint is also chronologically mixed with
most of it probably being of Bronze Age date....

Mesolithic activity in the Stonehenge area is scarce
(Cleal and Allen 1995, 470–3; Darvill 2005, 39–40, map
F). Only a little Mesolithic material was recovered from
the investigations along the A303: possible Mesolithic or
Neolithic soft hammer struck flakes and blades were
also recovered from fieldwalking immediately south of
the A303 at Longbarrow Crossroads (WA 1992;
2007b); soft hammer struck blades were found during
archaeological evaluations at Countess Roundabout
during works associated with the proposed Stonehenge
Visitor Centre (WA 1995).
A Mesolithic pit has been found at Boscombe Down
which may be akin to those found in the Stonehenge car
park, of Early Mesolithic date (Cleal et al. 1995; Allen
and Gardiner 2002). Further to the north on Salisbury
Plain a little Mesolithic material was recovered from
excavations along the military Southern Range Road
(including refitting blades from Boreham Farm
Bungalow; Ellis and Powell 2008, 141) and a small
assemblage of Mesolithic flint came from Breach Hill
(Harding 2006, 87). The lack of Late Mesolithic
material from the wider area simply reinforces the
importance of the finds from Countess Farm, the valley
location perhaps being significant. However, there are
limitations given the size of the assemblage recovered
and the small areas investigated by the test pits. These
results highlight the potential of this location but only
further investigation will enable better characterisation
of this activity.
Posted by Tim Daw at Tuesday, January 15, 2013