I recently noted in my collection of stones collected from field walking at All Cannings Cross that when washed one of them wasn't a sarsen but a fossil sponge or coral.

It appears to be identical and of very similar size to the fossil that the mace head found at Bush Barrow was made from.

Bush Barrow macehead - from Wiltshire Musem in Devizes - and the fossil. 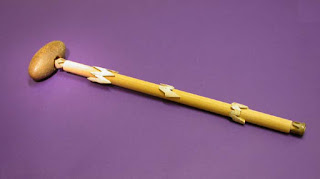 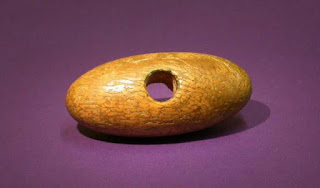 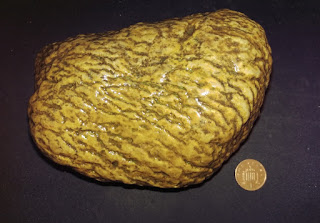 The references call it a fossil stromatoporoid from commonly found in the tin mining areas of South Devon. Are they also found on the Wiltshire chalk, or shall I invoke glacial transport to explain finding it here?

William Cunnington, wrote of the excavation of it:


We next discovered, on the right side of the skeleton, a very curious perforated stone, some wrought articles of bone, many small rings of the same material, and another article of gold. The stone is made out of a fossil mass of tubularia, and polished ; rather of an egg form, or as a farmer who was present, observed, resembling the top of a large gimlet. It had a wooden handle, which was fixed into the perforation in the centre, and encircled by a neat ornament of brass, part of which still adheres to the stone. As this stone bears no marks of wear or attrition, I can hardly consider it to have been used as a domestic implement, and from the circumstance of its being composed of a mass of seaworms, or little serpents, I think we may not be too fanciful in considering it an article of consequence. We know, by history, that much importance was attached by the ancients to the serpent, and I have before had occasion to mention the veneration with which the glain nadroeth was esteemed by the Britons ; and my classical readers will recollect the fanciful story related by Pliny on this subject, who says, that the Druid's egg was formed by the scum of a vast multitude of serpents twisted and conjured up together. This stone, therefore, which contains a mass of serpularia, or little serpents, might have been held in great veneration by the Britons, and considered of sufficient importance to merit a place amongst the many rich and valuable relicks deposited in this tumulus with the body of the deceased.

From the description by Wiltshire Museum of the mace head