Looking down on Stone 11

On the southern side of the now incomplete outer sarsen circle at Stonehenge there is a diminutive stone that leans. This is Stone 11 which has been broken. How it was broken and whether it has been re-erected are unknown. Its small size is often claimed to be evidence that the circle was never completed with lintels but the stone is broadening as it goes up and would have had a top that would have been wide enough to support lintels. Whether it did or not will never be known. I think the size of it may be related to it being on the route in from from the southern entrance to the henge. Next to it there is the remarkable Stone 10 which does still have its full height and as can be seen in the picture two tenons. it is obviously designed to hold a lintel on both sides, including one to go over Stone 11. There appears to be wear and a ridge formed on the top surface where the lintels were. Maybe evidence that the circle was completed with lintels.

Stone 10 on the ground plans is slightly out of true with the circle, but the stone twists as it goes up and the top is exactly in line with the circle, one of my favourite demonstrations of the clever engineering that went into building Stonehenge. 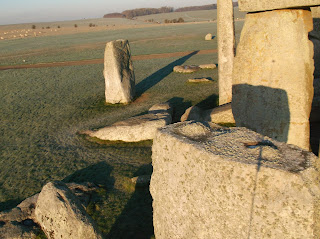 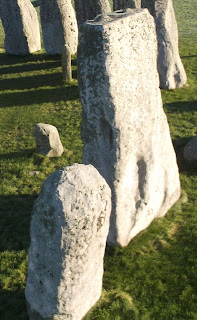 Click to enlarge - Thanks to J for the photos.
Posted by Tim Daw at Wednesday, January 25, 2017