"In 1812, Sir Richard Colt Hoare (henceforth RCH) published "The Ancient History of Wiltshire, Vol. 1" - a magnificent work (one of a pair - volume 2 followed later) which detailed the work he sponsored and William Cunnington supervised in the years before and after the turn of the 19th century.

There is a map in Ancient Wiltshire labelled "Stonehenge and its Environs", drawn by Philip Crocker, that depicts the landscape around the monument together with the barrows that had been investigated and numbered by RCH during this work. RCH also grouped the barrows into several areas in his "Stations" and "Itineraries" in the text, but not totally consistently in all cases.

These days, we don't use RCH's barrow numbers.

That sort of thing tends to frustrate someone like me so I created a Google Map backed by a Google Spreadsheet and set about matching up the data into a single reference work for the barrows shown on RCH's famous map. It took about 6 months to achieve - two days to do the coding, the rest of the time going through each of the sources carefully matching records together. Unsurprisingly, there are some errors in each of the reference sources so I sent in reports of discrepancies along the way and the custodians of those sources have been able to update the information in them to fix things.

There are still inconsistencies - it's inevitable. In the time between RCH's excavation and numbering of a barrow and Goddard and Grinsell's work in the early and mid 20th century, mechanized ploughing has obliterated many previously upstanding earthworks. Since RCH didn't have GPS or even decent OS maps to go by, determining exactly which slight rise in the ground matches which particular one of his barrows can be a huge problem.

Nonetheless, the end result is useful I hope. " 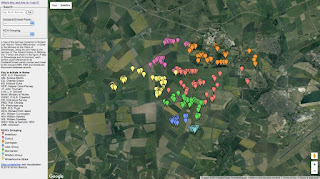