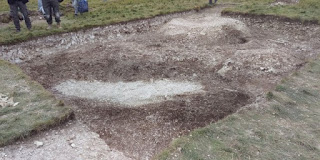 "At the start of our dig our best guesses were that they could be one of two things.

They might be the remains of standing stones – now lying flat or;

They might be pits dug to hold giant timber posts but then backfilled, similar to some unearthed by Professor Mike Parker Pearson and the multi-university Stonehenge Riverside Project near the southern entrance of the henge.

The work has progressed incredibly quickly and we’ve already been able to answer the first part of our conundrum. We have what appears to be one very definite pit and another taking shape on the opposite side of the trench."
https://ntarchaeostonehengeaveburywhs.wordpress.com/2016/08/02/durrington-dig-2016-tuesday-2-august/

"These pits were originally dug before the construction of the bank and ditch of Durrington Walls henge; therefore the material of the bank overlies these pits."
https://ntarchaeostonehengeaveburywhs.wordpress.com/2016/08/03/durrington-dig-2016-wednesday-3-august/


The story is more complicated, but still posts or intended posts not stones.