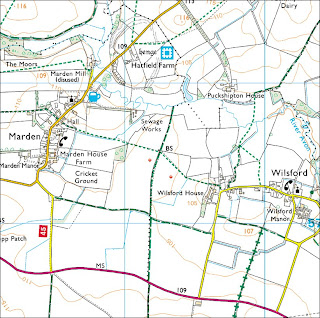 Pastscape - Detailed Result: MARDEN HENGE
Marden Henge is one of the largest Neolithic henge monuments in the British Isles, and lies between Stonehenge and Avebury. The earthworks are fairly irregular, and consist of a series of straight lengths rather than a continuous curve. These are broken by two causeways or entrances, one to the north and the other to the east, although the latter has now been questioned as an entrance, and a separate one proposed in the south east.
A thick deposit of gravel was recorded on top of the causeway to the south. It was within a slight cut, possible representing a former hollow way, similar to the roadway recorded at Durrington Walls. Coring indicates that the gravel continues and supports the theory that it is part of a Neolithic gravel road way leading from the henge to the River Avon.

The river here is only a couple of metres wide but lies in a marshy valley. But this is still the narrowest point of wet ground to cross between the source of the Sarsen Stones near Avebury and Stonehenge if one is looking for a route for their transport.

On the other side or south of the river the map shows a bridleway and parish boundary. This lies between the Wilsford Henge and the Marden Barrows.

The extraordinary thing about this track is its height above the neighbouring fields. This isn't peaty soil or on a slope, places where you expect the soil to eroded away from tracks, this is on stable clay solis and yet the track is up to a metre or more above the fields. 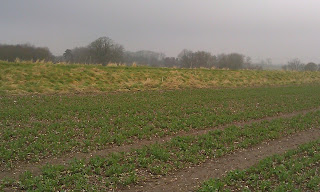 This track doesn't lead anywhere, check the map, so I don't believe it has been made up recently. I can't decide whether it is probably an ancient built causeway or if its height shows it contains the original ground surface of five or so thousand years ago.  Either way I would love to see an archaeological trench dug across it.
Posted by Tim Daw at Sunday, March 31, 2013