Marden Henges And The Sarsen Route To Stonehenge

Marden Henge in the middle of the Pewsey Vale is, I believe, on the route the Sarsen Stones were taken from the Marlborough Downs to Stonehenge. When I wrote that short pamphlet I didn't look carefully at the route through Marden assuming that it would have roughly followed the present road. But the southern boundary of Marden Henge is incomplete where it adjoins the river and has this intriguing description:

A section was excavated through the henge enclosure ditch terminal next to a proposed south-east entrance. The nature of this was confirmed and the ditch revealed as being originally 2m deep, and a considerable amount of prehistoric pottery, along with numerous antler picks and flint tools were recovered from it. Good organic preservation was also recorded from the lower levels of the ditch.
A thick deposit of deliberately laid gravel was recorded on the top of the causeway between the opposing ditch ends. This gravel was sitting within a shallow cut, possibly an earlier hollow way. This may well be a similar feature to the gravel roadway recorded at Durrington Walls, which led from the henge down to the River Avon. Preliminary coring outside the henge at Marden and along any likely route to the river indicates that the gravel continues and therefore supports the suggestion that it is part of a Neolithic gravel roadway leading from the henge to the River Avon.

So is this the causeway to the river crossing for the Sarsen Stones?


From 2009 there is a lengthy report which predates this:
Research Department Report 96/2009 - The Hatfield Earthworks, Marden, Wiltshire: Survey and Investigation which doesn't add much to this aspect of the henge but is very full report on the henge.

Research Department Report 76/2011 - Marden Henge and Environs, Vale of Pewsey, Wiltshire, A report for the National Mapping Programme is "forthcoming".

UPDATE: http://services.english-heritage.org.uk/ResearchReportsPdfs/008_2013WEB.pdf is a new report released on Wilsford Hange and the Barrow Cemetery

When we look at the southern side of the river there are more interesting places. On the opposite bank to the causeway there is a dry raised spur which leads to Salisbury Plain. And there is an ancient track and Parish boundary leading down to the river, see the map below. Could this be the track from the henge and causeway?

And there is also another henge and a large barrow with a ring ditch (or another henge?)guarding either side of this track. Details of these monuments are below. There is a lot going on. 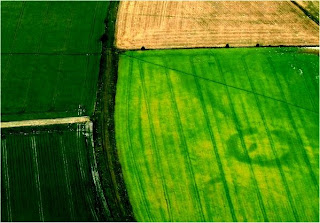 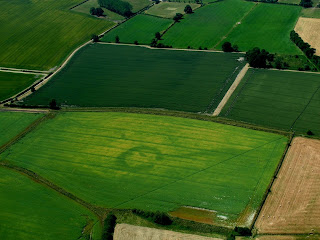 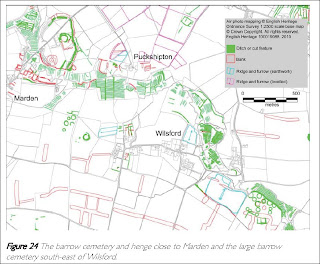 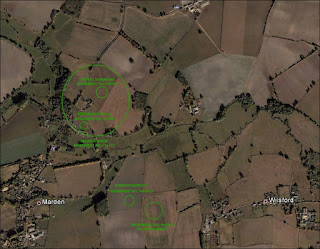 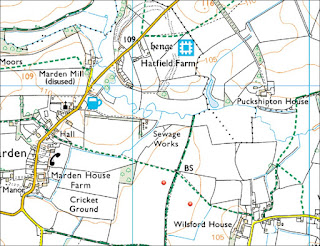 WILSFORD HENGE: MONUMENT NO. 1002029
A broad irregular penannular ring ditch, possibly a henge, and pits are visible as cropmarks on aerial photographs. The internal diameter of the enclosure is 43m and the external diameter is between 58m and 65m. The enclosure is defined by a broad and very irregular ditch which measures between 5m and 14m wide. There is an entrance, 12m wide, which faces north-east roughly in the direction of the contour, and towards the river Avon. A line of eight pits curves around part of the enclosure, facing the entrance. More possible pits, possibly forming part of a circle around the enclosure, are situated on the east and south sides of the enclosure . Another pit is situated within the south east part of the enclosure. Yet more possible pits, situated between 20m and 70m to the south west of the enclosure, may be associated features. There are a number of potentially confusing geological cropmarks in the area. It is therefore possible that some of the pits could be natural, or that some man-made pits in the vincinity have been mistaken for natural features. The enclosure is situated on a gently sloping N-S aligned spur of land to the south of the river Avon. Other possibly associated monuments in the vicinity include a possible barrow cemetery immediately to the north west (NMR Monument 1002033 ), Marden Henge, Hatfield Barrow and another unusual monument (NMR Monuments 215179, 215176,215182) are further to the north west across the river.

MARDEN BARROW CEMETERY - MONUMENT NO. 1002033
A possible Bronze Age round barrow is visible as cropmarks on aerial photographs. It is defined by a ring ditch measuring 42m across. It is part of a barrow cemetery and is situated adjacent to a possible mortuary enclosure and close to a possible henge (NMR Monument 1002029). The barrow is situated on a gently sloping N-S aligned spur of land to the south of the river Avon.

The other main monuments on the map are:

Beechingstoke 1a - MONUMENT NO. 215182
A Neolithic henge (Goddard's Beechingstoke 1a), is located within the southern end of the Hatfield enclosure (Marden Henge NMR UID 215179), just north of the River Avon. Excavation by English Heritage in 2010 confirmed the Neolithic date. These excavations revealed a well-preserved Neolithic chalk surface, or floor, within the henge bank. The central part was sunk into the ground, and had a large hearth surrounded by a gully. Outside the chalk surface, and further along the henge bank, there were middens, perhaps the remains of feasting debris. Finds included bone needles, awls and flint tools. The monument survives as a relatively well preserved and substantial earthwork, contrary to previous assertions.

HATFIELD BARROW
Hatfield barrow, now almost levelled, was described as being 70 to 80 yards in diameter and 50 feet high prior to 1818. Excavations by Cunnington, described by Colt Hoare, in 1807 (when it was 22.5 feet high) recovered wood ashes, animal bones and two small deposits of human bones, perhaps representing secondary inhumations. Cunnington's excavations culminated in the spectacular collapse of the 'Giant of Marden'. Ploughing in the mid nineteenth century ensured there was apparently no trace left of the barrow by the 1860s. The barrow appears on aerial photographs to survive as very low mound sitting in a shallow scoop, which extends farther on the eastern side and is possibly partially surrounded by a ditch. Field investigation in 2009 confirmed the survival of a low spread mound much disturbed by ploughing. Aerial photographs taken in 1976 suggest the survival of sub-surface remains of an asymmetric site about 75m across, comprising a mound c.55m across enclosed by a broad ditch or hollow. Geophysical survey in 2009 confirmed this. Excavation by English Heritage in 2010 identified a central posthole and evidence for tree clearance . The barrow was listed by Grinsell and Goddard as Beechingstoke 1. The barrow, and a small henge (NMR UID 215182) sit within Marden Henge (NMR UID 215179).

MARDEN HENGE
Marden Henge is one of the largest Neolithic henges in the British Isles. The enclosure, comprising a bank with internal ditch encompasses an area of around 35 acres. There are no surviving stone settings. The earthworks are irregular, and consist of a series of straight lengths. These are broken by two causeways or entrances, to the north and east, although the latter has now been questioned, and a separate one proposed in the south east. In 1768, during levelling of part of the bank, antlers and a human skeleton were found. Excavations by Wainright in 1969 identified Neolithic remains including antler picks, flintwork, and the skeleton of a young female near the north entrance, as well as a possible circular timber structure. Excavation in 2010 by English Heritage through the southern henge enclosure ditch indicated it was 2 metres deep, and contained pottery, antler picks and flint tools. A thick deposit of gravel was recorded on top of the causeway to the south. Coring indicates that the gravel continues, probably part of a Neolithic gravel road way leading from the henge to the River Avon. There was once a large conical mound near the centre of the henge, known as the Hatfield Barrow (NMR 215176). There is a small henge inside the southern boundary of Marden Henge (NMR 215182). These two monuments were also partly excavated in 2010 by English Heritage.


And nearby there is also
Charlton Barrow Cemetery and Roman Villa: MONUMENT NO. 220208
The cropmarks of 15 closely spaced Bronze Age ring ditches are visible on aerial photographs taken in 1959 and 1972. A Possible 16th barrow is recorded as a slight earthwork on lidar (airbourne laser scanning) imagery. Two of the barrows identified as cropmarks can also be seen as slight mounds on lidar. These are situated to the south of the river Avon between Wilsford and Charlton, 2km south-east of Marden henge. The ring ditches range in diameter from 19m to 55m and two of the barrows are double-ditched, suggesting a phased development. Three ring ditches extend into the field to the north where they are obscured by the earthworks of post-medieval water meadows. A fourth ring ditch has been partially destroyed by the course of the river. The ditches of the south-western barrows are incorporated into the possible Iron Age or Roman settlement enclosures, within which is a Roman villa (see NMR 907086). The ring ditches and barrow are recorded individually in the following records: NMR 1482559, 1482570, 1482572, 1482575, 1482576, 1482587, 1482592, 1482593, 1482611, 1482614, 1482619, 1482620, 1482624, 1482625 and 1482627.

Which also has a report due: Charlton Barrow Cemetery and Roman Villa, Wiltshire: Report on Geophysical Survey, July 2012
Posted by Tim Daw at Monday, March 18, 2013