From RESEARCH ON STONEHENGE with added plans.
Stonehenge has been the subject of myth, legend and, more recently, of academic research for more than eight centuries. 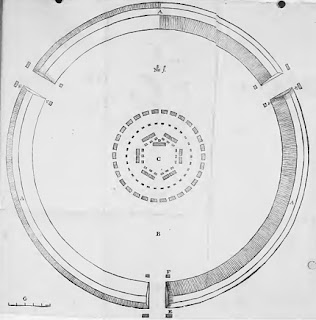 In the 17th century, Stonehenge started to receive royal visits. Prompted by a visit made by James I in 1620, the duke of Buckingham undertook the first known excavation in the centre of the monument. John Aubrey described this later as a pit 'about the bignesse of two sawe pitts', although where exactly he dug and what he found is not clear. James I subsequently commissioned the architect Inigo Jones to conduct a survey and study of the monument. Following Jones’s death the work was completed by his assistant, John Webb, and published in 1655. In this first book dedicated to Stonehenge, Jones argued that Stonehenge could only have been built by the Roman civilisation. The result was a plan of Stonehenge that he believed conformed to the Tuscan order of classical architecture; a geometrical design of four triangles within a circle. 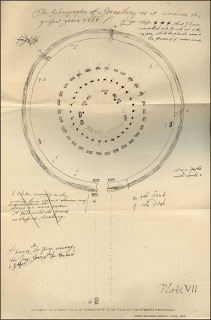 As debates continued over who built Stonehenge, a claim for the native British came from a Wiltshire-born man, John Aubrey. By command of Charles II he produced one of the first accurate plans of Stonehenge in 1666, and was the first to record what we now call the Aubrey Holes in his honour.

He made comparative studies of other stone circles of the British Isles and was the first person to discover and recognise the importance of Avebury henge and stone circle. He also noted similar stone circles in the more distant parts of the British Isles, which had not seen occupation by the Romans, Saxons or Danes, and logically concluded that they were temples of the native British. He further assumed that 'these ancient Monuments were Temples of the Priests of the most eminent Order, viz, Druids' – the Druids being the only prehistoric British priests mentioned in classical texts. 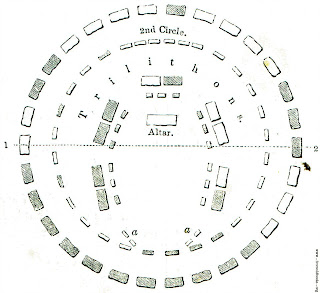 In the 18th century, Aubrey’s pioneering fieldwork paved the way for more detailed observation and recording by the antiquary William Stukeley. He spent each summer between 1721 and 1724 surveying and drawing at Stonehenge and Avebury. He observed details such as the stones of the outer sarsen circle being smoother on the inside and the principal line of the monument being to the northeast, 'where abouts the sun rises, when the days are longest'. He was the first antiquary to observe and record the monuments in the surrounding landscape, such as the Avenue and the Cursus, and to investigate nearby barrows. Like Aubrey, Stukeley claimed that 'we may very reasonably conclude, the elegant and the magnificent structure of Stonehenge was as the metropolitical church of the chief Druid of Britain'.
Posted by Tim Daw at Saturday, March 23, 2013