Great Trilithon from Stones of Stonehenge 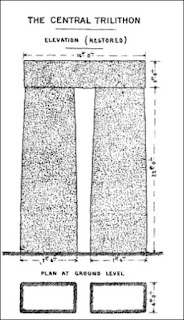 The Central Trilithon.—An elevation of the great central trili-
thon (restored) is given in Plate 5. This, the most important
feature in the whole structure, is now unfortunately a ruin. It is
commonly supposed that the fall of this trilithon was caused by
excavations conducted by the Duke of Buckingham in 1620, but
on the evidence set forth in Appendix D, it would appear that the
catastrophe took place at any rate before the year 1574.

One of the uprights (No.55 ) lies prostrate, broken in two, and,
the other (No.56)—which had been leaning over at a dangerous
angle—was restored to an upright position in the year 1901.

Particulars of the work connected with this restoration are set
forth by (the late) Professor William Gowland in his paper read
before the Society of Antiquaries on 19th December, 1901.
(Archaologia, Vol. 58, pp. 37—105.)

It may be regarded as probable that the main centre line, or
Axis, of Stonehenge, as set out by the builders, passed midway
between the two uprights (stones Nos. 55 and 56) of this central
trilithon. Under the careful superintendence of Professor Gowland
we may assume that stone No. 56, was, when re-erected, restored
with the greatest practicable accuracy to its original position. If
therefore we could ascertain the width of the space which originally
existed between stones Nos.55 and 56, the alignment of the Axis
of the Structure passing the side of stone No. 6 would be known
with practical certainty.
Professor Flinders Petrie, writing in 188o, estimates the width
of this space as 1ft. 1in. He says:—
“The estimated distance between them [Stones Nos. 55 & 56], elimi
nating the slew, is 13 inches, and this (though quite independent) closely
agrees with the standing trilithons which are 12.8 and 12.4 inches.”
(Stonehenge, p. 6.)
Sir Norman Lockyer, in 1901, with Petrie’s results before him,
made an independent examination of the position before stone No.
56 had been re-erected. He estimated the width of the space as
1 ft. 10 in., remarking as follows :—
“The inclination of this stone [No. 56] took place in the direction
of the axis of the avenue, and as the distance between it and its original
companion (No. 55] is known both by the analogy of the two perfect tri
lithons and by the measure of the mortise holes on the lintel they formerly
supported, we obtain by bisection the distance, 11 inches, from its edge, of
a point in the continuation of the central axis of the avenue and temple.”
(Stonehenge Astronomically Considered, p. 61.)

Lockyer, however, did not use this dimension for his work on
the determination of the azimuth of the Axis, for which his results
were obtained by an entirely different method.
In the plan of Stonehenge restored given by Colonel Sir Henry
James the distance apart of stones Nos. 55 and 56 appears, by
scale, to be about 2 ft. 6 in., about two and a half times the distance
shewn on the same plan between the other pairs of trilithon stones.
(Stonehenge and Turusachan, 1867.)
The dimensions noted above must however be considered
merely as conjectures, and the only real evidence obtainable on
the subject is that afforded by the lintel which now lies prostrate
at the foot of stone No. 56. The mortise sockets are rough, and
their edges a good deal damaged, but by holding a thin iron rod
in the middle of each socket the distance apart centre to centre
can be measured fairly accurately. This dimension is found to
be just about 10 ft. 6 in.
According to various authorities the average width at ground
level of all the uprights of all the trilithons is about  7ft. 6 in.
Colonel Sir Henry James gives the actual width of stone No. 56
as 7 ft. 6 in. As measured by the author however the width of
this stone near ground level is found to be just over 7 feet.*
If the two stones (Nos. 55 and 56) were exactly alike, and if
the tenon on each upright had been exactly on the centre line
of the stone, the distance of the stones apart centre to centre
would have been the same as that of the mortise sockets in the
lintel (viz., 10ft. 6 in.) and we should then obtain the following
results for the space between the stones :—
With stones 7 ft. 0in. wide . space 3 ft. 6 in.
,, ,, 7 ft. 6 in. wide . space 3 ft. 0 in.

But on the stone now standing (No. 56) the tenon is not in
the middle of the width of the stone, but is about 3 inches therefrom
—outwards. Hence, if the same peculiarity had been in the other
stone, the distance apart centre to centre of the stones would
have been 10 feet—i.e. 6 inches less than the distance apart of the
mortise centres. We should then obtain the following results :—
With stones 7 ft. 0 in. wide . space 3 ft. o in.
,, ,, 7 ft. 6 in. wide . space 2 ft. 6 in.
We may conclude therefore (on the evidence of the lintel)
that the width of the space between stones Nos. 55 and 56 of the
great trilithon, as originally erected, was not less than 2 ft. 6 in.
and not greater than 3 ft. 6 in.
The estimates of Petrie and Lockyer, for the width of space
between the two stones, were made before stone No. 56 had been
re-erected. It will be observed that they not only differ to an
important extent from each other; but that neither can, on any
reasonable assumption, be made to accord with the known width
of the stones and distance apart of centres of tenons. For some
further remarks on this subject see Chapter VII, pp. 133 and 134.
This matter has been considered somewhat at length as it is
of importance in connection with the determination of the alignment
of the Axis.


• The width of the standing stone No. 56 was measured carefully by the author
by the use of a rectangular wooden frame placed around the stone. The sides of
the lower part of the stone are practically parallel and vertical. The widths as
measured are :—
At 6 inches above ground .  7ft. 0 1/2 in.
At 7 ft. 6 in. above ground . 7ft. 0 3/4 in.