Route of the Stonehenge Stones across the Pewsey Vale

The BGS has just released an updated Geology viewer - https://geologyviewer.bgs.ac.uk/ - a very useful resource and fascinating to browse.

I thought I would revisit my proposed stone route across the Pewsey Vale which has, since I first proposed it on this blog, been largely adopted by serious researchers. While it is worth remembering that the easiest route isn't necessarily the one that was chosen, if they had wanted an easy life they wouldn't have started on building Stonehenge, there must have been a certain practicality involved.

From the Marlborough Downs to Salisbury Plain means the Pewsey Vale must be crossed. Before modern drainage large parts of it were marshy, as was the whole flat width of the Avon valley south of the Vale. Swamps are not great for dragging stones through. There are also some quite steep hills in the Vale, including Etchilhampton Hill which Atkinson's route went over. I would suggest skirting them was sensible.

So on the map we are looking for the easiest way across which avoids the hills and the areas marked as being peaty or alluvial clay. It seems that from Adam's Grave to near Redhorn Hill the best route does go though Marden. Redhorn Hill on the Plain is the gateway to the flattest route across it and can be climbed up to by a gentle slope from south of Marden. 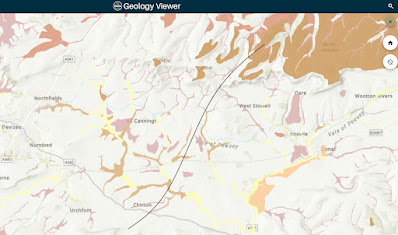 Map from BGS - route overlain by Tim Daw
Click to embiggen
My original leaflet on the route can be found here
Of course it wasn't just Sarsen Stones that were brought across the Vale. The bluestones were most logically brought to England near Gloucester, I favour the A40 overland route but it wouldn't be unreasonable to believe in rafting them round the south coast of Wales. From Gloucester the route to Marlborough is obvious and links to the Sarsen fields of the Downs.
Posted by Tim Daw at Tuesday, July 05, 2022