The Bluestones of Stonehenge weighed about a maximum of 3 tonnes when they were first erected. They are not massive boulders. They are about the same weight as the average weight of a stone used to build the Great Pyramids of Egypt. The pyramids used over two million of those sized stones.

Marcus Abbott and Hugo Anderson-Whymark's report Stonehenge Laser Scan: Archaeological Analysis  includes this table of above ground weights. Allowing for a third of the stone below ground, the heaviest is about three tonnes. Many of the stones are less, some because they are smaller stones, some due to the degradations they have suffered over time. 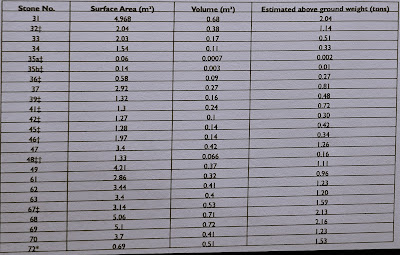