A glacially-transported clast at Stonehenge reviewed.

There is a new paper published on Researchgate.net - It isn't peer reviewed, and is a work in progress and so it would be unfair to review it too harshly.

A glacially-transported clast at Stonehenge

The first descriptive paragraph ends: "the Newall Boulder was worked or dressed, it was probably found in one place and dumped in another. However, there is no reason to think that it was carried to Stonehenge from many kilometres away."
And of of course there are many reasons to think it may well have been, it was found within circles of 90 or so other stones that were brought from many kilometres away.  There is a quote that humanly transporting such a boulder to Stonehenge would indicate a lack of common sense but then common sense was not the motivation for the building of Stonehenge.  Stones are carried across the land for many reasons beyond practicality, though in this case this one might be well just be part of a larger stone that was part of the bluestone circle, they are carried in remembrance of people and places, they may be a sacred relic, they may merely be a packing stone.
The actual data about the stone are still sparse and the writer acknowledges it in a heartfelt plea for more research and as such he is making bricks without straw when he theorises further.
The geological description raises only two points of interest, in its history it seems to have lain mostly exposed in a acidic environment, but then has been buried in chalk. In the chalk small clumps of calcareous tufa have grown on the surface.  The extract from Kellaway's 1991 Hot Springs of Bath book makes this point: 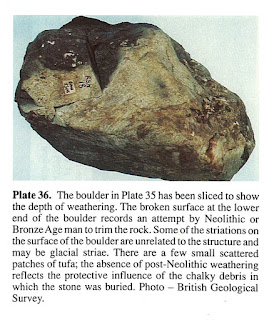 That the tufa patches have grown after the boulder has been bashed about shows the burial in chalk was after it had become an artefact; they are obvious on the fresh dark surface to the top left. And that it was buried in the chalk after it had been worked is strong evidence that it was brought by humans from its acidic homeland to Wiltshire.

The other point raised is that: "The apparent streamlining on a patchy quartz deposit on one flattened flank of the boulder is interpreted as the result of slickensiding on a fault plane"  That this resolution of what Kellway thought might be glacial striae is included is to the great credit of the paper because without this striated flattened face having a glacial origin there is no evidence of glacial transport.
So there is no physical evidence it was glacially transported but there is that its arrival in Wiltshire was at the time of it being used by humans, when many other stones were being brought by humans, to where it was found a hundred years ago.
To sum up it seems the author simply refuses to acknowledge that neolithic people were as capable as modern humans. That they could not have transported a rock from Wales to Wiltshire is his fixed view and everything must be seen through that lens.
Posted by Tim Daw at Wednesday, July 13, 2022