Yesterday I quoted from an 1822 book about the route the Sarsens took from the Marlborough Downs to Stonehenge. This passage made me wonder.


Sarsen.org - Quote from The miscellaneous tracts of the late William Withering: Volume 1 1822: "In the lowland vale separating the northern and southern tracts of downs there was entire in 1773 near Woodborough an immense block popularly called the kissing stone.
This I learned with regret has been broken and dispersed for various purposes more than twenty years past and now not a fragment remains upon the spot."

In Woodborough at the crossroads there is a Sarsen stone erected in 1995 to note fifty years since the end of the Second World War. The hole in the middle might just be large enough to kiss through. Is this the Kissing Stone that has been rediscovered? 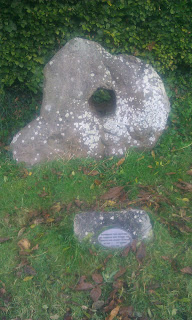