From the Laser Scan report:


Stone 57
A quadrilateral symbol was recorded on this stone by R.S. Newall in July 1953 (Figure 18). This symbol has been the subject of much debate, as it was initially reported as a Breton-style ‘shield-escutcheon’ or box-goddess symbol (Atkinson 1956, 32). This interpretation has long been questioned; not only is the carving unclear but radiocarbon dating has placed the Breton carvings millennia earlier than Stonehenge (Lawson and Walker 1995,30-34; Lawson 2007). The laser-scan model reveals this ‘quadrilateral’ to be part of a much larger complex of lines that appear to relate to the pick dressing of the surface. Notably, rectangular panels, possibly representing the working area of individual stone masons, are present on a number of stones (e.g Stones 12, 54 and 60). 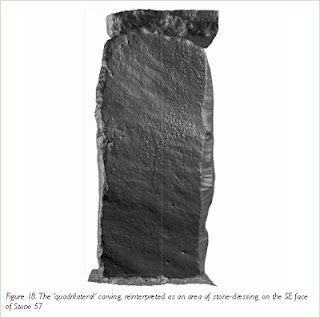 I thought it interesting to dig out Atkinson's original photo from his book where the surface of 57 is rubbed clean because the stone was fallen and people had been walking and sliding on it. It looks much more like a incised box than a recessed panel in the old photo. 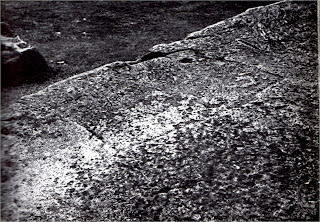