Using the latest 3D laser scanning technology, an English Heritage analysis of Stonehenge has found new evidence of the importance of the two solstices to its creators, including that of the midwinter sunset,

The laser scan has revealed signiﬁcant differences in the way the stones were shaped and worked. These differences show that Stonehenge was not only aligned with the solstices, but that the view of the monument from the Avenue, its ancient processional way to the north east, was particularly important To approach and view the stone circle from this direction means that the midwinter sunset had special meaning to prehistoric people, and that they made deliberate efforts to create a dramatic spectacle for those approaching the monument from the north east.

A detailed analysis of the ﬁrst comprehensive laser survey of Stonehenge reveals that those stones on the outer sarsen circle visible when approaching from the north east have been completely pick dressed - that is, the brown and grey crust on the surface has been removed exposing a fine, bright grey-white surface. By contrast the outer faces of surviving uprights in the south-western segment of the circle were not pick dressed.

These stones facing north-east are also the largest and most uniform in shape, unlike the south-western segment of the monument where there are several smaller and more irregular stones. The lintels are also exceedingly well worked and finished, compared to those that survive elsewhere in the monument.

The study also shows that the techniques and amounts of labour used vary from stone to stone. These variations provide almost definitive proof that it was the intent of Stonehenge’s builders to align the monument with the two solstices along the NE/SW axis.

The sides of the stones that ﬂanked the solstice axis were found to have been most carefully worked to form very straight and narrow rectangular slots. These stones include two of the north-east facing sarsens in the outer circle, the Great Trilithon in the inner sarsen horseshoe, and a now isolated upright stone in the south-west segment of the outer circle.

Since all other stones have visibly more natural, less neat outlines, this strongly suggests that special effort was made to dress those that ﬂank the NBSW axis to allow a more dramatic and obvious passage of sunlight through the stone circle on midsummer and midwinter solstices.

Loraine Knowles, Stonehenge Director at English Heritage, said: "The new presentation of Stonehenge will enable visitors to appreciate the importance of the solstitial alignment far better. It’s why we are closing the A344 — which severs the alignment - to enable the stone circle to be reunited with the Avenue.”

The new Stonehenge visitor centre at Airman’s Corner, 1.5 miles west and out of sight of Stonehenge, is scheduled to open in late 2013.

Analysis of the laser scan has also led to the discovery of many more prehistoric carvings, including 71 new Bronze Age axeheads, which brings the number of this type of carvings known in Britain to 115.

Susan Greaney, Senior Properties Historian at English Heritage, said: “We didn’t expect the results to be so revealing about the architecture of Stonehenge. It has given further scientific basis to the theory of the solstitial alignment and the importance of the approach to the monument from the Avenue in midwinter.
English Heritage commissioned the ﬁrst comprehensive laser survey on Stonehenge in 2011. Archaeological analysis was then carried out to examine the high-resolution data that was produced for all the stone surfaces. 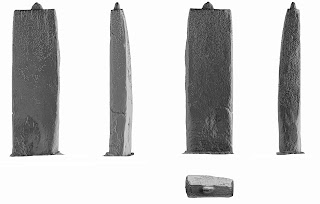 Laser scan of the Great Trilithon reveals its extremely straight, neat outline and smooth surface, compared with all the other trilithons. It suggests that Stonehenge creators made deliberate efforts to shape and dress it more carefully due to its special position on the solstice axis, just as they did for other stones that flank this axis (c) English Heritage 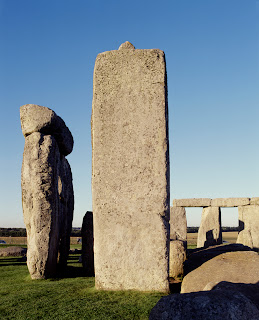 The extremely straight and neat outline of the Great Trilithon, compared with all the other trilithons, suggests that Stonehenge creators made deliberate efforts to shape it more carefully due to its special position on the solstice axis, just as they did for other stones that flank this axis (c) English Heritage
Posted by Tim Daw at Tuesday, October 09, 2012