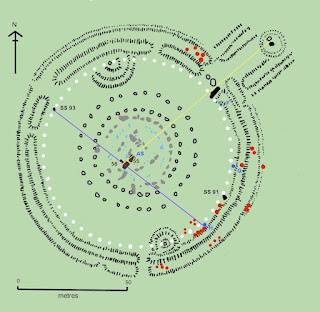 Click for larger
Image created by Tim Daw from an original from Wikipedia. The image is licensed under the Creative Commons Attribution-Share Alike 3.0 Unported license.

This large plan of Stonehenge shows all the stoneholes / holes except the postholes. It also includes cremations except those found in the Aubrey Holes. As well as the unexcavated western side it is believed that cremation scrapes were missed by Hawley so it may be incomplete. (See Mike Parker Pearson - Stonehenge 2012 for example)

It highlights Stones 55 and 56 and the Altar Stone (AS) as well as the holes F,G and H.
The latter three are sometimes dismissed as root holes but were thought by the excavators to be stoneholes.

The rear or outer faces of 55 and 56 are the flattest of any of the sarsens and these worked surfaces would have aligned on the purple line - a line I have fancifully called the Resurrection Line.

Station Stone 93 and Hole H are also on this line.

(Station Stone 94 and Hole G also are approximately on the same alignment but as they are both missing it is harder to be certain.)

The Altar Stone also is similarly aligned, as are two post holes just to the north of it, but along with other features so aligned that is for further investigation.

This alignment has, as far as I can tell, been missed by all previous researchers because it has just been assumed that the Great Trilithon either is or should be symmetrical with the rest of the Trilithon Horseshoe. See below for Hawkins Plan where such an assumption is made.

But it wasn't. The original builders were cleverer than that and it incorporates two separate alignments into one Trilithon, both sunrises and both sunsets.

There is an argument that because the outer ring of Sarsens, especially stone 10, blocks the actual viewing along the alignment, then it cannot exist. Obviously the Great Trilithon was erected before the outer ring and it may follow the positioning of previous wooden posts.

But just as the Priest facing the Altar in a Christian church is facing the rising sun, even though he cannot see it, an alignment can be significant without being an astronomical sighting device.

And why the Resurrection Line? Our incomplete record of cremation remains seems to show a concentration at the end of the line. And completely without evidence I imagine on the morning after the winter solstice, when the sunset was noted with fear and dread that the sun was dying, the next morning the rising of the reborn sun was greeted with celebration and joy. And maybe hope that the dead would also rise again? 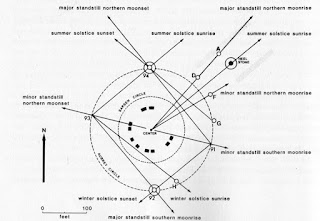