So the French have packed their bags and the Fire Garden circus has moved on, leaving Stonehenge to its peace with just the faint whiff of smoke lingering, and the hint of cheap aftershave from the Olympic Paps who witnessed the Olympic torch there this morning.

The Fire Garden didn't work for me. It is always interesting to see Stonehenge being enjoyed in a different way and I am sure it was magical for many to be able to enjoy the freedom of the stones. But the various flames just seemed to be various flames dotted around. They didn't give me any resonance of Stonehenge, no alignment, no drama of entrance and exit, no sighting through. But that is just me enjoying being an old curmudgeon.

But accidentally it did give me a couple of magical moments. I slipped the bounds and wandered out to the west and on turning to face the monument it suddenly came alive. Lit by flames with revellers and music inside and around it as dusk enveloped it. That felt very ancient and real. 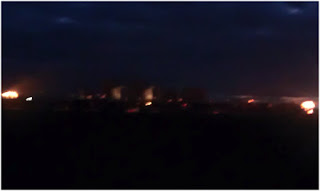 The ditch was lit by flower pots full of burning wax and on the quieter west side families and friends had gathered round each pot and filled each sausage shaped section of the ditch with a group, connected but separate. (My camera failed to pick them up clearly so here is a picture of a single group round to the north).

Again another ancient scene recreated without artifice, it just felt naturally right and I felt honoured to witness it, it probably hasn't happened since it was dug and probably never will again. 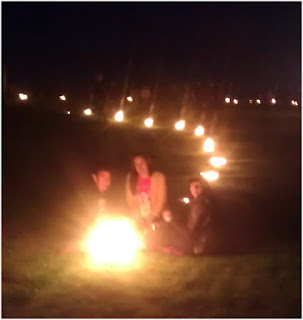