Cleal et al's Stonehenge in Its Landscape: 20th Century Excavations (English Heritage Archaeological Report) seems to have a couple of mistakes with regards to Stone 55. Stone 55 is the fallen upright of the Great Trilithon and 56 the straightened upright one.

Firstly Cleal has on page 569 a scaled drawing of the stone from a 1919 Ministry of Works survey, on p.568 it has to the same scale a drawing of Stone 56.

Here are the two drawings and scale, in meters, together: 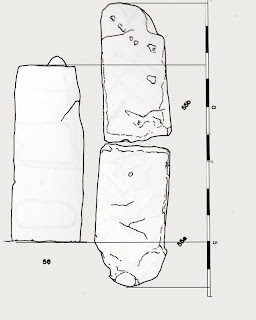 I have set the base of 55 into the ground to the depth of the stonehole excavated by Gowland, more on that below. The stone is obviously too tall to be part of a pair with 56.

To check the drawing Simon Banton and I measured the stone on 4th March 2013.

By  rescaling the image (by about 75%) I have produced a more accurate scaled drawing, and by subtracting the gap and straightening the image a reconstruction of the original stone. 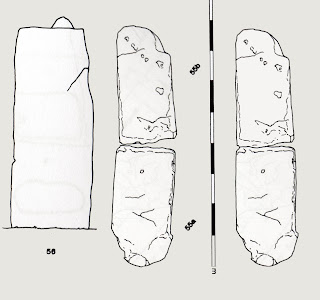 The stone now fits as part of the Great Trilithon.

It is also notable that it has not lost any of its length apart from the tenon and some rounding of the corners.

Looking closely at the top of the stone it seems that the oval of the base of the tenon is still visible, it maybe that the Laser Scan can confirm this. William Stukeley in 1740 published his detailed account of Stonehenge which included an engraving of Stone 55 showing the tenon still in place. 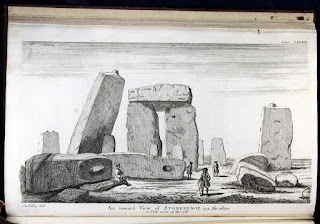 A recent picture taken from Google Streetview shows that the stone is still in the same place, extending the same distance over the Altar Stone. This confirms it is still the same length. 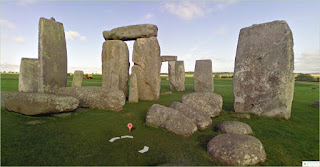 Of course the height of the stone depends on how far it is buried into the ground and this where a second mistake has crept in.

So secondly, with regards to the stonehole of the fallen upright of the Great Trilithon Stone 55. (This has also been covered in a previous post - http://www.sarsen.org/2012/11/stone-55-stonehole-correction-to-cleal.html)

Here is the passage from Cleal and the Figure 12 referred to from Gowland's report.

The vertical scale in Gowland's diagram is in 6 inch increments (150mm).
Click picture to enlarge.


Trilithon III, the ‘Great Trilithon’
Trilithon Stone 55, WA 4143: Gowland excavated be-
neath one part of this stone (55a) which is fallen and broken
into two parts (excavation Q Gowland 1902, 52—4, figs 7 and
12) (Plate 5.3). He did not find a clear well-cut hole but only
a ‘shallow cavity’ and he postulated that the stone had stood
in the cavity, propped and wedged by sarsen stones which he
found lying under the fallen stone. The ‘cavity’ as it shows in
section is barely 2ft (0.6 1m) deep (op cit, fig 12) and it seems
unlikely that such a large stone could have stood in it. Without
full excavation of the area under 55a, however, Gowland’s
observations and interpretation cannot be tested. The section
which shows the ‘cavity’ (ie Gowland 1902, fig 12) also shows
a much clearer and deeper cut which looks similar to the
stonehole for Stone 56. This, however, if it was the hole for 55,
would place that stone too far into the interior to line up with
Stone 56. Gowland does not explicitly describe this cut but he
may be referring to it when he describes how two of the blocks
of sarsen which he considered to have been supports for Stone
55 when it was standing ‘had the ground entirely cut away from...


Cleal says that the hole is barely 2 feet deep (ie four 6 inch increments). This is the measurement from the underside of the fallen stone to the bottom of the hole. But the stone is sunk into the ground. On the left can be seen the ground surface level. One can only estimate the the ground surface when the stone was upright but it is probably close to the level marked. This would give a hole depth of about 4' or 8 of Gowland's marks. The bulbous base of 55 is also about 4' from the worked flat side to its base indicating that this is the depth it probably was in the ground. Gowland's hole fits perfectly.

The cut in front is probably  part of the very ancient pit (WA 2448/3773) that was dug in front of the Trilithon for reasons unknown. For more on the pit see The Age of Stonehenge - Mike Parker Pearson et al. It is not clear how deep and far under Stone 55a Gowland excavated and if the illustrated cut extends under the stone or is the end view of the western edge of it.

In conclusion, Stone 55 is largely complete but broken lying across its original hole which was about 4 feet deep. The hole was saucer shaped and when the stone fell the bulbous end rose up and slid backwards out of the hole.