A new theory that the tallest stone at Stonehenge points towards the midsummer sunset has been observed to be correct, it has been claimed.
Earlier this year Tim Daw, a steward at the site, said he had discovered the previously unknown alignment, involving a line of stones at 80 degrees to the axis of the monument.
The theory was tested when the solstice sun set at 21:26 BST on Saturday.
Mr Daw said he was "really thrilled" at the finding.
"It wasn't the best evening for a sunset picture as a bank of cloud came in at the wrong moment but it was close enough to prove the point," he added.
"I put forward this theory. I said 'this stone, the sun will set along its back' [on] Midsummer. Yes it did.
"[There was] a wonderful sunset last night. We could see the sun going down directly in line with... the back of this stone. It was fantastic." 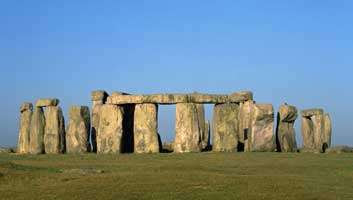 A stunning new theory proposes that Stonehenge was little more than a great place for annoying tossers to congregate.
Neolithic expert, Professor Simon Williams, bases his theory on repeated observations of ‘a vast assortment of dicks with nothing better to do turning up around this time of year, every year’.
Williams’ staggering new proposal demolishes previous theories that the sacred ring is some sort of freaky Stone Age calendar.
Armed with fancy measuring gear, Williams’ team could find no alignment whatsoever with celestial bodies, noting that the largest stone points towards the overpriced gift shop.
Williams said, “There’s a lot of shite talked about how the tallest stone is aligned with the midsummer sunset, but the only way you could think that is if you’re on drugs.”
“If it’s a calendar, then they forgot the fucking leap year,” he insisted.
The theory was tested when the solstice sun set at 21:26 BST on Saturday, when just as Williams predicted, an array of tedious dreadlocked hippies appeared and claimed the site for themselves.
Williams said he was “really thrilled” at the finding.
“Sure enough, as the sun began to set a troupe of arseholes came marching over the downs banging a fucking drum of some description,” he added.
“I’m afraid to say that ancient man had much in common with these New Age twats, even down to the frankly appalling personal hygiene.”
“There was a nice sunset, sure, but it was ruined by these legal-high snorting knobheads.”