I was lucky enough to visit Grimes Graves last weekend (highly recommended) and was astonished how the hollows were so reminiscent of the hollows on Rybury Camp which I had been on the previous day. Cissbury Ring seems to be also very similar to Rybury Camp. 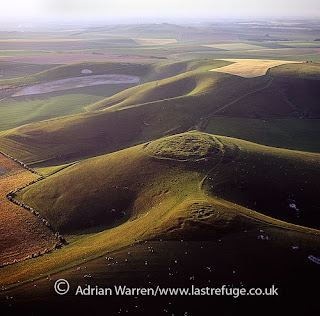 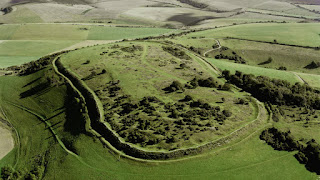 Cissbury Ring
Click any to embiggen
The flint mines at Cissbury and Grimes Graves are acknowledged to be of neolithic age. At Rybury, as far as I know the hollows have never been excavated. When a trench was dug across the ditch by Desmond Bonney in 1963 the silts contained over 600 flint flakes.
The hollows on Rybury are variously described as Post Medieval chalk or flint extraction" - See the listing documentation
Full details from Pastscape are below:
A C Smith in 1884 recorded that chalk for chimneys was excavated from them.
The magisterial report on  The Neolithic Flint Mines Of England Martyn Barber, David Field, Peter Topping 1999 makes no mention of Rybury Camp.
British Archaeology magazine for July August 2016  has an extensive article on Neolithic Flint Mines and Mike Pitts has made available a paper he wrote some time ago.
With all this interest I wonder if it is time to look again at Rybury..
Pastscape has three different record for Rybury Camp:


(SU 0832 6397; 0847 6372)
In 1995, RCHME carried out an analytical earthwork survey of the causewayed enclosure on Rybury Hill (SU 06 SE 14), as part of a national project to record industry and enclosure in the neolithic period (1). The overlying Iron Age hillfort and presumed Post Medieval chalk or flint extraction pits were allocated new NMR numbers (respectively SU 06 SE 63 and 64), to enhance the record.

The main areas of the extraction pits were not surveyed, but those pits which impinge upon the prehistoric earthworks were recorded. The pits are generally circular, but intercut each other. They range from 0.3m to 1.5m deep. The freshness of the earthworks suggests that a Post-medieval date is probable, though earlier activity cannot be ruled out. The form and location of the pits suggests that flint was being quarried for building material.

For further information, see Level 3 archive report and earthwork plan at 1:1000 scale, held in the Archive. A number of colour photographs were taken, subsequent to the field survey, but as part of the same project; these are also available through the Archive. (1)

The Post Medieval extractive pits described by the previous
authorities have also been mapped at 1:10,000 scale from aerial
photographs. The quarried areas to the south of the hillfort, which
are centred at SU 0847 6372, appear to encroach upon or be surrounded
by three sides of a possible enclosure. It measures 100m by 70m and
it is very difficult to say if it predates or is a result of the
quarrying. Only the west side of the enclosure appears to survive.
(2)
SOURCE TEXT
(1) Field Investigators Comments
RCHME: Industry and Enclosure in the neolithic: Rybury Camp Survey


Paul Tubb has written extensively on his blog about Rybury and Flint mines which I quote below to keep all the information together.
http://gentlemanantiquarian.co.uk/knap-hill/


The causewayed enclosures of the Vale of Pewsey also share an artefactual association with the extraction and knapping of flint. Knap Hill is immediately adjacent to Golden Ball Hill where evidence of extensive Mesolithic and Neolithic flint extraction from the clay-with-flints and primary knapping has been uncovered. The excavations carried out by Connah at Knap Hill in 1961 produced a flint assemblage dominated by debitage (Connah 1965: 14–7) and mole activity on the northern slope of the hill has turned up a large spread of debitage including axe thinning flakes (J Pollard: pers. comm.) Bonney’s excavation of a segment of the outer ditch at Rybury revealed over 600 flint flakes but no finished tools (Anon 1964: 185). Lobb’s excavation at Crofton, although small in extent, revealed a flint assemblage from the primary ditch fill that can be best described as debitage. Harding (Lobb 1995: 20) described it as knapping waste derived from core preparation relating to “small-scale activity for domestic purposes”.
Thomas (1999: 41) and others (Edmonds, 1995: 69 & 73) note an apparent association between causewayed enclosures and lithic sources and stone working and suggest their liminal nature enabled the regulation of lithic production. Certainly the liminality of all three causewayed enclosures in the Vale of Pewsey has been established but as Barber et al. (1999: 53) point out, the choice of location for flint mines or quarries is necessarily constrained by the availability of the raw material and so the two enclosures most likely to be associated with flint extraction and processing are Rybury and Knap Hill. Of those two sites, only Knap Hill is located close to known sources of flint used in the prehistoric period at Golden Ball Hill.
The exploitation of flint sources at Golden Ball Hill concur with a number of observations made by Barber et al. (1999). They note that although the choice of location is constrained by the presence of flint, many mines do not “slavishly” follow the course of flint strata nor is the most accessible or best quality stone always extracted (Barber et al., 1999: 53). They argue the site of extraction must have already possessed a significance or meaning to the groups that chose to extract flint from that location either because it was a prominent landscape feature or a place of import in seasonal or cyclical activities either for raw materials or gathering places. Of course a combination of all three reasons is entirely possible and this may be the case at Golden Ball and Knap Hill (see below). Barber et al. (1999: 57) claim that there are two general locations for flint mines, based on a survey of sites from the South Downs, and they are prominent locations with a high degree of visibility and, secondly, more discrete sites which are hidden by the topography. Certainly the first choice of location would apply to Golden Ball Hill and it is interesting to note an observation by Barber et al. that in Sussex, downland mines tended to be located close to Clay-with-flints and that there would be a strong visual contrast between the dense woodland of the Clay-with-flints and the more open scrub and woodland of the lower chalk slopes. Furthermore, the white of the spoilheaps composed of chalk would form a strong visual counterpoint to the dark of the woodlands. These observations of Barber et al. do bear a strong resemblance to the situation at Golden Ball Hill where a cap of Clay-with-flints covers the top of the ridge, a ridge that can be clearly seen from the rise immediately north of Durrington Walls some 20km south. The flint extraction seems to have taken place on either side of the summit of the hill but later flint extraction has obscured many of the Mesolithic and Neolithic sites.