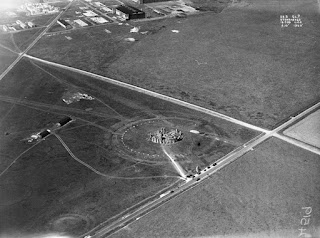 "Between 1917 and 1921, Stonehenge had an aerodrome for a near-neighbour. Initially a Royal Flying Corps training establishment, from January 1918 it became the No. 1 School of Aerial Navigation and Bomb Dropping, home to a contingent of RNAS Handley Page bombers. The aerodrome featured two camps either side of a take-off and landing ground, the first located close to Fargo Plantation, and a subsequent and more substantial technical and domestic site situated either side of what is now the A303, a few hundred yards west of Stonehenge... Following a public appeal, the aerodrome and neighbouring farmland was purchased, the buildings dismantled and removed, and the land handed to the National Trust.”

This description is from the excellent report by Martyn Barber - Stonehenge Aerodrome and the Stonehenge Landscape; English Heritage Research Dept Report 007/2014 also available on Academia.edu  (The byway between Stonehenge and the buildings in the photograph has been moved so that the site of some of the buildings is now within the triangular monument field.)

One unfortunate reminder of the Aerodrome buildings is that building rubble, including what appear to be asbestos cement sheet fragments, is present on the surface. The monument field is open to visitors at the solstice so it worth noting the following points. (English Heritage were made aware of the presence of asbestos in the field at last summer's solstice.)

Left untouched these fragments present minimal danger, however harrowing of the field has further broken them and probably released asbestos fibres. These fibres will have mainly bound with soil particles but in dry conditions they can become airborne when disturbed. For complete safety do NOT enter this part of the field.

Do not pick up any fragment. As a protected site nothing should be disturbed anyway but it is very important not to pick up an asbestos cement fragment. It may look like an interesting ancient bit of pottery but it could be deadly.

Asbestos cement board fragments are thin, 3-4mm. light grey and dusty looking. But they may have been painted or combined with other materials. 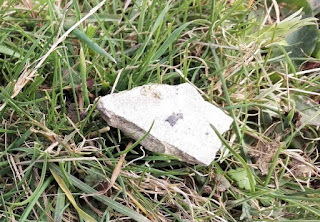 One of the asbestos cement fragments 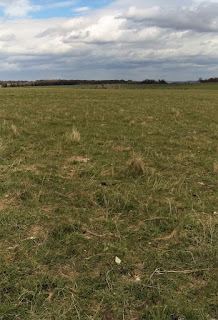 
Left alone there is no danger, so enjoy Solstice!

UPDATE : Oct 2016 English Heritage seem to have fenced off the area with rope. Excellent. 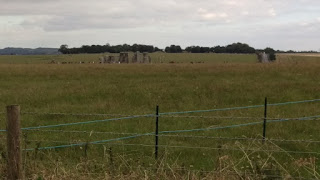 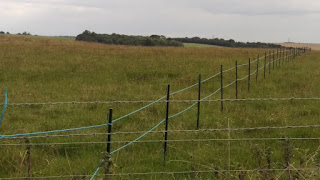