North of the New Visitor Centre near Stonehenge and very visible as one waits for a bus on the platform there is a grey concrete tower on the near horizon. It stands alone within a group of barrows and the nearest farm buildings are a couple of hundred yards away.

Many wonder as to its purpose. It is now abandoned but it used to be a silo for the conservation of grass for cattle and sheep feeding in the winter.

There are very few such silos remaining, they became outdated technology and as they tended to be in the farmyard the space they stood on was valuable.

(There is a silage clamp at the nearby buildings constructed of reused concrete railway sleepers which is the replacement for the silo.)

The grass was loaded in to the top of the silo by either an elevator as this colour wartime photo shows  or chopped and blown up a tube. It was consolidated to make it anaerobic, usually by being trampled down as the level rose. Molasses or acid was added to create the right conditions for butyric fermentation to pickle the grass. 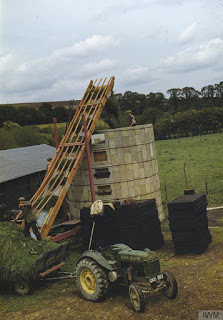 One side of the silo had small doors all the way down, the frames can still just be seen at the Stonehenge silo. Whilst some silos had mechanical unloaders most relied on a farmworker cutting it out and pitching it down through the door at the level of the silage. 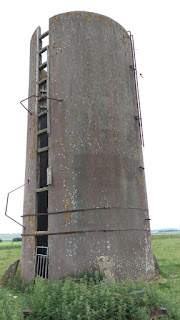 
The Stonehenge silo looks to be 1940s or even earlier and is a rare example and worthy of interest and preservation
Posted by Tim Daw at Tuesday, June 14, 2016