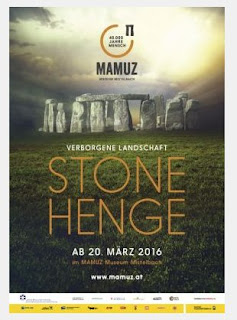 2.3.2016 press release (Mamuz Mistelbach, LBI ArchPro, Land NÖ)
STONEHENGE - A Hidden Landscape
Unique exhibition from 20 March 2016 at MAMUZ Museum in Mistelbach
Images und Texts available for download under https://celum.noeku.at/pindownload/login.do?pin=XTEYB
STONEHENGE….
The most famous and mysterious monument of prehistory! Built over several centuries more than 4,000 years ago. But by whom, why and how? Discoveries which are currently causing a real stir worldwide are being shown for the first time at the museum of prehistory MAMUZ in Mistelbach: the new history of Stonehenge!
Stonehenge is unique. But it is more than just a stone circle and it never stood alone. It is embedded in a landscape with hundreds of monuments – some of them still visible at the site today but others remained hidden undetected in the ground until recently. The Ludwig Boltzmann Institute and the University of Birmingham examined the landscape around Stonehenge using state-of-the-art technology and brought fascinating things to light for the first time after thousands of years. As well as impressive grave finds, the true-to-the-original reconstruction of the giant stones in the middle of the exhibition is a particular highlight.
Experience the magnitude of the stone monument and its extensive landscape in a unique time machine, beginning long before Stonehenge and ending long before the first druids laid eyes on the stone circle.
…IS CLOSE ENOUGH TO TOUCH!
The latest findings of the Stonehenge Hidden Landscape Project were brought to light by the team of researchers from the Ludwig Boltzmann Institute for Archaeological Prospection and Virtual Archaeology (LBI ArchPro) and the University of Birmingham. Co-director of the research project and Scientist of the Year 2015, Wolfgang Neubauer, is curating the exhibition: “With geomagnetic prospection and ground-penetrating radar measurements, an underground area of more than 14 km² around the stone circle was examined. This led to new discoveries which again help us understand the cult landscape around Stonehenge.
These sensational results are being presented to the public for the first time in a fascinating exhibition at MAMUZ Museum in Mistelbach.” Working alongside the exhibition team is one of the renowned researchers in connection with Stonehenge,Julian Richards. As the author of a number of reference books and the head of many excavations around Stonehenge, his knowledge is making a significant contribution to the success of the exhibition.
An innovative exhibition design by Christof Cremer and impressive visualisations mean visitors can find themselves in the middle of the stone circle with full-sized replicas of the stones and gain a tremendous insight into the landscape around Stonehenge. Original stone material as used thousands of years ago to build the complex can also be seen right up close enough to touch. In a 3D model of the entire landscape, it is possible to experience the magnitude of this prehistoric cult landscape and its development over time.
The new findings are combined with original finds from Stonehenge which have never before left the British Isles. Museums providing unique finds have been acquired as partners.
One particular highlight at MAMUZ is the grave of an archer who was buried with the biggest copper dagger found to date in the British Isles. The copper used for this comes from the Austrian Alps. The grave goods of the people of the Bell-Beaker culture, who were active in the whole of Europe at the end of the Stone Age, are presented with bountiful graves from Lower Austria from the same period. Stonehenge is the world’s most famous preserved prehistoric monument. The monumental circular enclosures in Lower Austria are almost 2,000 years older, however. These can also be seen at MAMUZ and are compared with Stonehenge.
TOUCH, TRY IT OUT and EXPLORE – according to the motto of MAMUZ as an adventure museum, the exhibition will fascinate history fans and also families because history becomes an adventure – the interactive elements of the exhibition are a unique experience for visitors of all ages.
Exhibition 2016 in MAMUZ Museum Mistelbach
Stonehenge. A hidden landscape | 20 March – 27 November 2016 | Tue-Sun, 10am-5pm
MAMUZ Museum Mistelbach, Waldstraße 44-46, 2130 Mistelbach, www.mamuz.at
press contact: MMag. Renate Heger (MAMUZ Museum Mistelbach) +43 (0) 664/60499281, renate.heger@mamuz.at
Partners of the exhibition:
Working together with renowned cooperation partners, academics from Austria and abroad and also experts in exhibition design and multimedia presentation, MAMUZ is showing the world’s first comprehensive exhibition about Stonehenge and its landscape. The exhibition is possible thanks to the support of partners such as the Ludwig Boltzmann Institute, the Landessammlungen Niederösterreich, Archaemedia, the University of Birmingham, the University of Vienna, the University of Buckingham, atelier christof cremer, 7reasons and the partner museums in England, the Wiltshire Museum in Devizes, the Salisbury Museum and the Dorset Country Museum.