Mike Pitts has suspicions ( https://mikepitts.wordpress.com/2016/03/08/heres-why-i-think-that-stonehenge-photo-is-fake ) about the Stonehenge photo that won the British Life Photography Awards 2015 - He thinks there has been some photoshopping going on and maybe elements have been added or taken away. 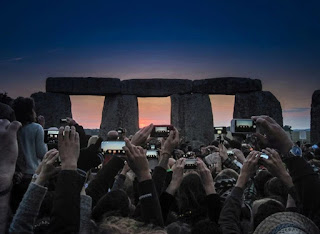 I don't know a fraction of what Mike does about photography but I did notice all the hands (pictured below - do click to enlarge) seemed to show an appalling lack of diversity in the Stonehenge crowd, they all seem to belong to slim young white men wearing art college cool dark jumpers. Some even seem to be wearing identical wrist bands and jumpers.  How strange that a random section of the Stonehenge revellers seems to consist of trendy clones, I must have missed them when I was there. 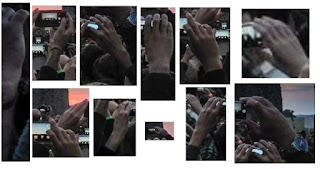