This is a fuller copy of the letter I sent British Archaeology which was published in Issue 132  in an edited, and more readable, form. It was written before I noticed the parch marks so it was very prescient.

Frank Stevens’ guidebook to Stonehenge was first published in 1916 and continued in print until 1938. It is still admired especially for the woodcut illustrations by Heywood Sumner. The first one is this. 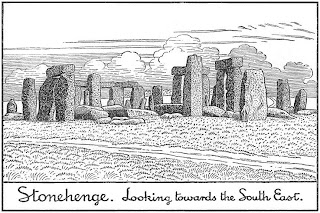 But there is a problem with this illustration which Stonehenge geeks may notice immediately but seems not to have been noticed when the book was in print.

There is a second mistake which is with the caption, the view is towards the north east, not the south east; a mistake I have only just noticed despite studying this picture many times over the last year.

As a clue here is a contemporary postcard from Frith’s showing the same scene, which also has a similar captioning mistake saying it is “from the N.W” when it is from the South West: 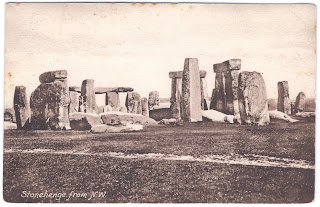 Here is an earlier version of the picture: 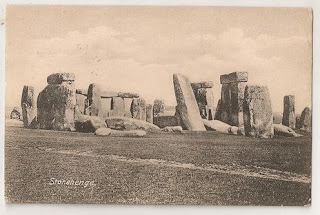 The problem, if you didn’t notice it is that the tall stone, stone 56, was straightened on the 19th September 1901.

It seems that the postcard printers altered the picture rather than have a new photo taken.

Which was a shame as on the evening of the 31st December 1900, the trilithon on the left, Stones 21,22 and 122, was blown down in the course of a severe storm. So you can have stone 56 upright with 22 fallen or 56 leaning with 22 standing or for eighteen months 56 leaning and 22 fallen, but at no time in the early twentieth century were 56 and 22 both upright.

So the illustration in the official guidebook was taken from a faked photograph and not from reality.

The history of Stonehenge is full of examples of people looking at it but not really seeing it.

From the public path looking across the width of the monument the dagger carvings on Stone 53 can be seen clearly on any sunny afternoon. But it seems no one noticed them until Richard Atkinson did in July 1953. They show up in early photographs; they are in view but not seen. Once they were seen many other were spotted. When we know what to look for we can easily see it, it is much harder to see something we don’t expect to see.

In the 1960s C A “Peter” Newham and Gerald Hawkins, and others, looked for astronomical alignments at Stonehenge.  This illustration is from Hawkins’ book. 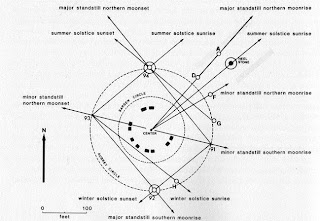 Peter Newham produced a similar one, below, which concentrates on the Station Stones and the indeterminate F, G and H holes (some authorities think they may be natural rather than man made features).

Whilst they were busy looking at the small Station Stones and on plans where missing stones and holes were they failed to see a much larger object already on this alignment towering over them.

As to whether the alignment is a real artefact or not is another argument, what is indisputable is that many people were looking for it.

The Great Trilithon at the centre of the inner sarsen horseshoe consisted of Stones 55, 56 and the lintel 156. 156 lies on the ground beside the broken 55 but Stone 56, as mentioned above, stands upright. It has, as did 55, highly worked flat sides. But these sides are not symmetrical to the horseshoe or the acknowledged Summer Solstice Sunrise – Winter Solstice Sunset alignment through the monument.  The stone is skewed about 10 degrees from this line, which puts it on the alignment that Hawkins, Newham and other were looking for.

It might be argued that Gowland, who straightened the stone did not get it back into its original position but close examination of his records and acknowledgement of his skill and experience makes this unlikely. He stated that the original position of Stone 55 and thus the whole trilithon was in line with 56.

I believe that the skewing is significant, others may not,  but either way  millions of people have looked at it and investigators have studied it but they all failed to see it and what it might mean.

There is still a lot to be properly seen at Stonehenge.