A caesium magnetometer survey was conducted as part of the Marden Environs NMP enhancement project (RASMIS 6302) over an area of approximately 11ha, encompassing the Bronze Age barrow cemetery and Roman villa complex at Charlton St Peter, Wiltshire, previously identified through aerial photography and limited geophysical coverage. It was hoped that more extensive magnetic survey might enhance the archaeological record of the site and determine the survival of the monuments that fall largely within an arable field reverted to pasture through a countryside stewardship scheme. A vehicle-towed, caesium magnetometer array was used to cover the accessible areas of the site and the results confirm the majority of the barrows to the north of the site survive as very weak anomalies, although levels of magnetisation in the vicinity of the Roman settlement are more enhanced. 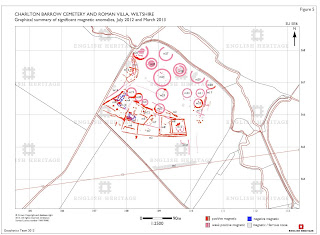