Gowland's Report on The Great Trilithon.

The Recent Excavations at Stonehenge, with Inferences as to the Origin, Construction, and Purpose of That Monument.

The Recent Excavations at Stonehenge, with inferences as to the Origin, Construction, and Purpose of that Monument. Abstract of a report presented by W Gowland, F. S. J., to the Society of Antiquaries, December 19th, 1901.

The fall of one of the uprights of the outer circle of Stonehenge on the night of 31st December 1900 (cf MAN, 1901. 18) led the owner, Sir E. Antrobus, Bart., to permit a careful examination of the remainder by a committee appointed for this purpose, and to execute the works recommended by this committee for the protection of the stones from further damage. The engineering work was planned by Mr. Carruthers and superintended by Mr. Detmer Blow. The exploratory work was conducted by Mr. Gowland, and a most careful record was kept of every detail of the incidental finds.

The primary object, the replacement of the “leaning-stone” in its original erect position, was effected by enclosing the stone—which had declined from 77 degrees in 1650 to the dangerous angle of 61 degrees in 1901, and which showed three serious fissures on its upper side—in a cradle of stout timbers, and raising it with ropes and winches, while supporting it also on the underside by struts of stout timber. To secure it for the future the whole of the underlying soil was removed in successive sections down to the rock level and replaced by concrete; and it was in the course of this excavation that the discoveries to be described were made.

The principal objects found were (1) chippings from the great blocks, (2) implements, (3) hone and coins. The chippings were of all the varieties of stone known to have been used in the monument. Professor Judd, of the Royal College of Science, is engaged on a detailed report on their characters. They lay far too deep to have been merely the work of despoilers, and show that all the stones were worked upon more or less after their arrival on the site of erection. The proportion of “sarsen” chips to "bluestone" shows, however, that the “sarsens” must have been dressed roughly before their arrival, and only finished at Stonehenge; while the "bluestones" must have been wholly dressed on the spot....

The mode of erection was shown conclusively in the course of the excavations and differed in different cases, for the “recumbent stone,” 25 ft. long, went only 4 ft. into the ground, while the “leaning stone,” 29 ft. long, went 8 ft. down. The reason is obvious, for the two stones were set up as a pair, to carry a lintel, in the most important part of the whole structure. The shorter stone, therefore, being set less deep, had a more elaborate base, also, to gain base, was only dressed on the parts which showed above ground. The leaning stone was erected by (1) excavating a pit with three vertical walls and one sloping rim on the side next the stone ; (2) raising the head-end of the stone by levers and timber packing till its foot slid down the sloping rim into the pit; (3) hoisting it from about 50 degrees into an erect position by ropes ; (4) securing it. in place by the smaller “ sarsens “ which support its oblique lower surface. Similar leverage is customarily employed in Japan with trunks of trees, and many rope-ends each pulled by one man.

The “recumbent stone,” on the other hand, was (1) supported at its foot-end on a low wall of small “sarsens”; then (2) tipped upright, as above, against two large “sarsens” placed in front; then (3) packed tight, as above, with disused mauls.

The chronology also receives important new light from these excavations. A legend is current that the “bluestones” circles are of earlier date than the “sarsens,” and that they were brought from Ireland. Both statements prove to be inaccurate.

"Sarsen“ chippings go right down to the bed rock, along with chippings of “bluestone” ; the “sarsens” prove to have been raised from inside, which could only have been done before the “bluestones” were set up, and there is evidence for a much less remote origin for the “bluestones “ than Ireland....


NOTES - This report differs slightly from his published report so I have highlighted two phrases in purple - the replacement of the “leaning-stone” in its original erect position,.... If set back in its place this indicated the “recumbent stone” would be exactly in line with the “leaning stone.”.
They are of relevance as to the original postition of the Great Trilithon and my theory of its mid-winter solstice Sunrise alignment. 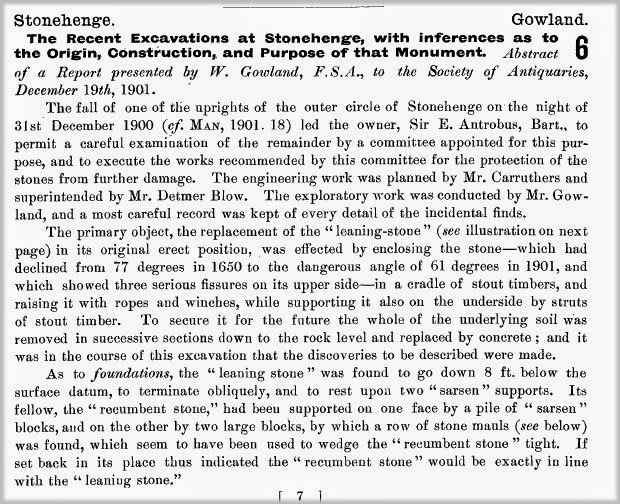 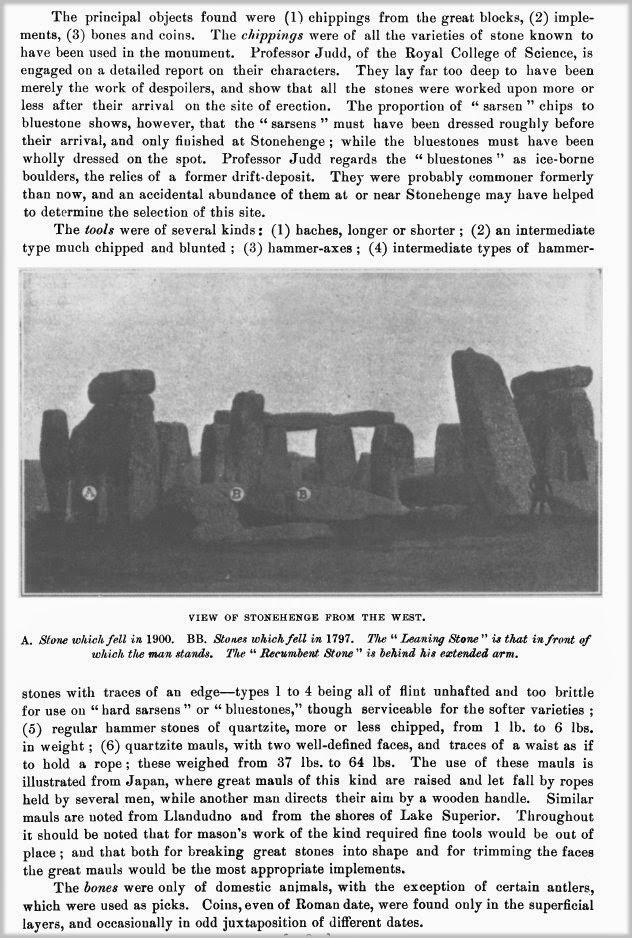 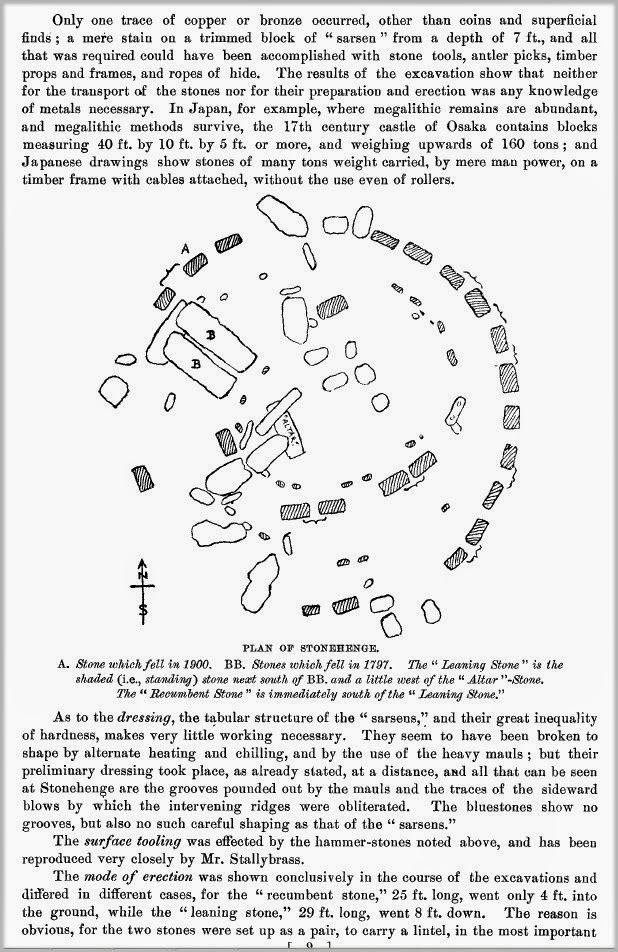