"Another .. spot is made use of by daws (corvi monedulæ) as a place to breed in, and that is Stonehenge. These birds deposit their nests in the interstices between the upright and the impost stones of that amazing work of antiquity: which circumstance alone speaks the prodigious height of the upright stones, that they should be tall enough to secure those nests from the annoyance of shepherd-boys, who are always idling round that place." 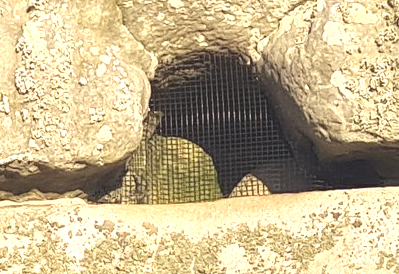 But no longer - in 2021 anti-bird netting was inserted into their ancestral home above Stone 52 to prevent nesting. As a Daw of Stonehenge, so to speak, I have always taken an interest in them.
Just noting this on Twitter unexpectedly provoked an outpouring of outrage so I thought a little background might help. 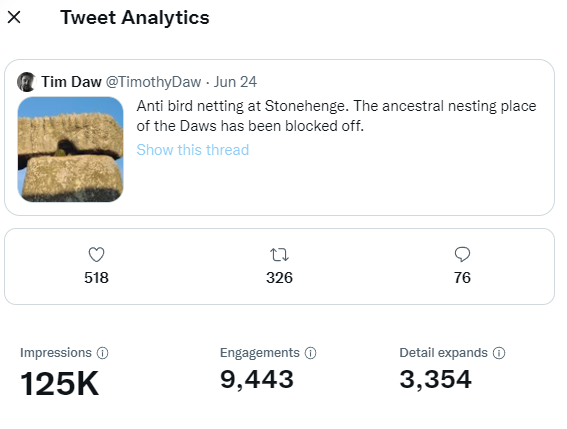 Following a close up physical investigation (pictured) on 27th March 2019 it was decided that restoration work on the lintels was desirable.

Photo from @EH_Stonehenge
Before any repairing, adding to or altering a scheduled monument can be undertaken a Scheduled Monument Consent (SMC) must be obtained from the Secretary of State for Digital, Culture, Media and Sport through Historic England . It is a criminal offence to carry out or to permit others to carry out unauthorised works to a scheduled monument, i.e. works undertaken without Scheduled Monument Consent.
The SMC is a detailed document that sets out the need for and the proposed work - it is available here
It is noticeable that it was the welcome replacement of concrete mortar with more suitable lime mortar. And that the lichens were to be protected during the work. No other work was authorised.
There is no mention of birds or bats or of the adding of anti-bird netting to the scheduled monument.
As the work took place in September the bird nests would not be being used as nests and so can be legally removed.
But it is of course an offence under the Wildlife and Countryside Act 1981 to intentionally or recklessly:
All bat species are designated and protected as European protected species (EPS). The National Biodiversity Network Atlas shows that bats are present in the area including Section 41 species which have extra protection. The narrow dark spaces under the lintels would seem to be likely bat roosts so a bat survey will have had to be done and a plan formulated to ensure any bats aren't harmed.

The work of replacing the mortar in September 2021 was explained by English Heritage in a blog post
English Heritage have kindly provided an explanation of the netting:
"Jackdaws have still been seen nesting happily at Stonehenge this year. We welcome jackdaws to Stonehenge but we also have to consider the conservation of the monument, particularly in certain locations. We have conducted a trial with Historic England to help protect rare lichens, and the ancient stone, from bird muck by placing a fine mesh screen underneath a small number of the monument’s lintels. This was put in prior to nesting season and is being closely monitored."
The results of the trial will be interesting.
Further information from English Heritage came in a statement to the BBC
"A spokesperson from English Heritage, who run the Unesco World Heritage Site, said they introduced the mesh screens beneath some monument lintels last autumn prior to the nesting season.
They said the trial, conducted in consultation with Historic England, is being "closely monitored over a year's cycle".
They added the increase in excrement as the number of jackdaws increased over lockdown was "damaging the rare lichens on the surface of the stone".
"And would eventually affect the surfaces of the ancient stones themselves," they added.
"We welcome jackdaws to Stonehenge but we also have to bear in mind the conservation of the monument, particularly in certain locations.""
UPDATE - I have requested clarification on the trial that is being undertaken - https://www.whatdotheyknow.com/request/anti_bird_netting_at_stonehenge
And someone else has asked about the Bat Survey referenced above.
https://www.whatdotheyknow.com/request/stonehenge_bat_survey
Information as it is received will posted here.
Posted by Tim Daw at Monday, June 27, 2022