Heritage Sites of Astronomy and Archaeoastronomy in the context of the UNESCO World Heritage Convention: Thematic Study no. 2

This is the second Thematic Study in a joint venture between ICOMOS, the advisory body to UNESCO on cultural sites, and the International Astronomical Union to present an overall vision on astronomical heritage, to explore what might constitute “outstanding universal significance to humankind” in relation to astronomy, and to highlight broad issues that could arise in the assessment of cultural properties relating to astronomy. In this volume there is particular emphasis on the recognition and preservation of the value of dark skies at both cultural and natural sites and landscapes, and the book includes a thematic essay by Michel Cotte exploring ways in which dark sky values might be recognised in a World Heritage context.

The subject matter ranges from prehistoric sites related to astronomy, such as seven-stone antas (prehistoric dolmens) in Portugal and Spain and the thirteen towers of Chankillo in Peru, to modern observatory sites such as AURA in Chile and Mauna Kea in Hawaii. It also covers cultural practices dependent upon dark skies (including a case study on the astronomical timing of irrigation in Oman), the heritage of science and technology related to space exploration (with a case study on Baikonur Cosmodrome in Kazakhstan), and natural dark-sky places such as Aoraki–Mackenzie International Dark Sky Reserve in New Zealand. Virtually all of the case studies are structured in the form of segments of draft dossiers.

This Thematic Study is a joint publication by Ocarina Books and ICOMOS. This e-book version has been published in June 2017 in time to be available at the 2017 meeting of UNESCO's World Heritage Committee. It can be downloaded, free of charge, from this site as well as from ICOMOS and the UNESCO Portal to the Heritage of Astronomy.

The study, of course, includes a lengthy and authoritative section on Stonehenge. 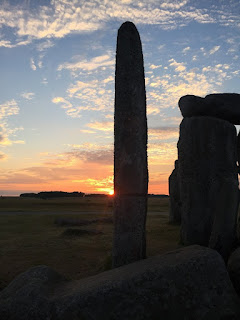