What is Going On? Tree Cutting at the New Visitor Centre near Stonehenge

English Heritage are busy cutting down trees at the New Visitor Centre near Stonehenge in preparation for their revised Transit System.

The approved plans show that they need to cut one gap in the existing belt of trees between the present access to the coach park and the eastern end of the belt.

It looks as though they have cut two gaps and neither of them match the plans.

Does anyone know what is going on? 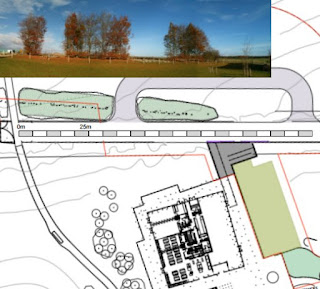 Click to enlarge - I have overlain the plans with a scale and a photo showing the two gaps taken today - with perspective the match isn't exact but is fairly close.
Plans http://unidoc.wiltshire.gov.uk/UniDoc/Document/File/MTYvMDM5ODgvRlVMLDcyMTYzNw==
or look under  http://unidoc.wiltshire.gov.uk/UniDoc/Document/Search/DSA,863043 for proposed coach park.
Posted by Tim Daw at Sunday, November 13, 2016