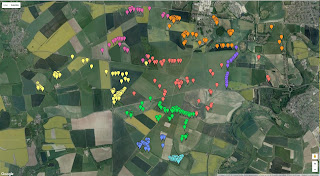 In 1812, Sir Richard Colt Hoare (henceforth RCH) published "The Ancient History of Wiltshire, Vol. 1" - a magnificent work (one of a pair - volume 2 followed later) which detailed the work he sponsored and William Cunnington supervised in the years before and after the turn of the 19th century.

There is a map in Ancient Wiltshire labelled "Stonehenge and its Environs", drawn by Philip Crocker, that depicts the landscape around the monument together with the barrows that had been investigated and numbered by RCH during this work. RCH also grouped the barrows into several areas in his "Stations" and "Itineraries" in the text, but not totally consistently in all cases.
These days, we don't use RCH's barrow numbers.

That sort of thing tends to frustrate so Simon Banton created a Google Map backed by a Google Spreadsheet and set about matching up the data into a single reference work for the barrows shown on RCH's famous map.

There is a downloadable spreadsheet of the GoogleDoc data compilation so other people can play with / archive it. Just in case Google should ever go belly up, it'd be a shame if it held the only copy!
It's linked to in the copyright notice at the bottom left of the map's left column
Posted by Tim Daw at Friday, November 25, 2016