The number 56 may not be arbitrary... 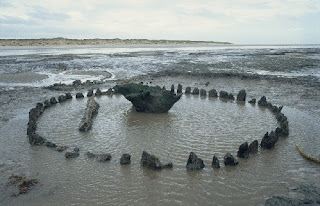 "There were 55 large oak posts within the circumference of the circle and one smaller upright timber. The timbers were set side by side in an elliptical circumference around an inverted oak tree.
Upon excavation timbers 35 and 37 were found to be the two forked branches of one trunk or branch."

Proceedings of the Prehistoric Society VOLUME 69, 2003
The Survey and Excavation of a Bronze Age Timber Circle at Holme-next-the-Sea, Norfolk, 1998–9 by Mark Brennand & Maisie Taylor 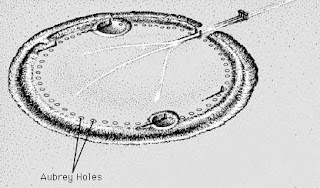 "There have been many proposed explanations for why the number of Aubrey Holes at Stonehenge is 56. Perhaps the most intriguing of these explanations, certainly at one time the most controversial, were the proposals that the Holes were used as counters for predicting lunar eclipses by keeping track of the passage of years (Hawkins 1965) or the passage of certain intervals of days (Hoyle 1977). It also has been suggested that the Aubrey Holes, again used as counters for various time intervals, could predict coincidences between the setting points of the midsummer sun and the new moon (Newton & Jenkins 1972) and even foretell amplitudes of tides on the English Channel and the North Sea (Beach 1977). While interesting, these primarily astronomically-based speculations seem somewhat contrived and ad hoc from a latter-day perspective. In fact, the implication that there was a practical significance to the number 56 and that the Aubrey Holes had an astronomical use is generally not now favoured. Rather, it is supposed that they basically served a ritualistic, ceremonial purpose and that there is nothing otherwise significant about the number of Holes (cf. Atkinson 1956, Burl 1981, Heggie 1981). Despite this current consensus, there is reason, besides the symmetrical layout of the Holes, to suspect that the number 56 at Stonehenge may not arbitrary."


The coincidence of there being 56 outer timbers at Seahenge was pointed out to me on my visit to see the fantastic exhibition of it at King's Lynn where I was generously shown round by Francis Pryor.
Posted by Tim Daw at Sunday, November 06, 2016