The minutes of the Planning Committee ar now available:

With regard to the promised path on the route of the grassed over A344 they had this to say:


It was noted that the permissive path agreed as part of a legal agreement when the A344 was originally closed, was further down the site and did not form part of this application.....Although the location of the pathway connected to the A344 promise was outside of the application area, it was felt that Officers should work to achieve it.

The application is unsurprisingly recommended for approval but I'm pleased to see my major objection has succeeded.

The professional consensus is that the views won't be spoilt by a new building so nothing can be done about that but the blocking up of the pedestrian access to the east of Byway 12 will be prevented: 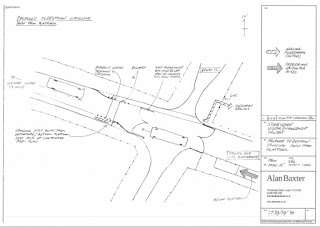 The Officer's recommendation:"Notwithstanding the submitted drawings showing the proposals for directing pedestrian arrivals in the vicinity of the A344 junction with Byway 12, prior to the commencement of the development hereby approved further details shall be submitted to and approved in writing by the Local Planning Authority demonstrating how pedestrians using the signed and lined route on the southern side of the A344 can access the Stones without having to cross the A344 or to walk within the route used by the Visitor Transit System to the east side of Byway 12. The approved details shall be implemented before the proposed bus turning arrangements are brought into effect."
http://unidoc.wiltshire.gov.uk/UniDoc/Document/File/MTYvMDM5ODgvRlVMLDc0MTg1NQ==

My objection was noted under: Other issues raised that are not material planning considerations:

Some aspects of the original planning permission for the Visitor Centre are still not completed/conditions not complied with, e.g. the Right of Way from the Stock Bottom (A303) to the Stones, along the path of the old A344 is still not open for use, and there is no landscaped walk to the Stones from the Visitor Centre – [There is an ongoing enforcement case regarding some issues from the previous consent, however this is not of relevance to the current proposal].


I have been carefully looking through various planning documents about the New Visitor Centre near Stonehenge and the hub at Stonehenge, this is in response to English Heritage applying to alter the coach and visitor transit facilities which badly need improving. I look forward to the day when a safe and efficient system is put in place and I would not wish to impede this, but at the same time this is an incredibly valuable and important landscape and to accept the second best for short term expediency shames us all.

It is with regret, but a sense of having to do the right thing, that I have lodged two objections to the new planning application 16/03988/FUL for these changes which include the building of a new coach station in the present temporary coach park.

In the previous application S/2009/1527 ,  which this application is attempting to rectify some of the inadequacies of, the Environmental Statement 11110202R_ESVol 3_App 6.1_MH_24-09-09 notes that the Coach Park, and to a lesser extent the New Visitor Centre, will have a substantial/adverse impact on the view from VP09 the western end of the Cursus (the impact was predicted to decrease over fifteen years as landscaping shielded it). From the Lesser Cursus VP10 it would also have a similar effect. It is worth noting that the planted landscaping was removed when the temporary  coach park was installed and so the decrease in impact has yet to start.


The new building in the Coach Park will be very prominent from these two viewpoints and yet the Landscape and Visual Impact Assessment, 11110205_Photosheets_08-04-16.indd, makes no mention of these views from these very important monuments within the World Heritage Site and the substantial adverse effect it will have.

The Phasing of the Works document  for the previous application S/2009/1527 ,   http://unidoc.wiltshire.gov.uk/UniDoc/Document/File/Uy8yMDA5LzE1MjcsNjk5MTI4 makes clear that in the summer of 2016  that the permissive path for walkers and cyclists will be made available on the route of the old A344 from Stonehenge Bottom to its junction with Byway 12

This new application shows the blocking up of the gate and path at the western end of this route and no mention of how the promised permissive path will be implemented. As well as encouraging more sustainable travel to the centre it is important for experiencing the holistic history of the site that this path follows the ancient road.

This omission is so serious the application should be rejected until such time as plans to show this permissive path following the route of the old A344 are included and how its users are to be allowed passage.

I hope these objections encourage English Heritage to look again at their plans and produce something better.

Trying to produce a focused and specific objection I concentrated on the lack of a Landscape and Visual Impact Assessment of the building. There are two Landscape and Visual Impact Assessment survey documents produced, neither of them as far as I can see discuss the impact of this new building after it has been built. http://unidoc.wiltshire.gov.uk/UniDoc/Document/File/MTYvMDM5ODgvRlVMLDcyMTYyOA== does discuss the impact of the revised coach park from the Cursuses and concludes it will be mildly beneficial.

This is because the new coach park will have landscaped screening planted. The irony is that the original coach park had such planting, which was then ripped out for the temporary facilities introduced last year. So the improvement is merely returning to what should be there...

Very kindly Austin Kinsley has sent me one of Pete Glastonbury's wonderful Stonehenge shots which shows the New Visitor Centre and Coach Park from the western end of the Cursus; the proposed new Coach Station building is this side of the two white coaches that show up in the middle of the picture. 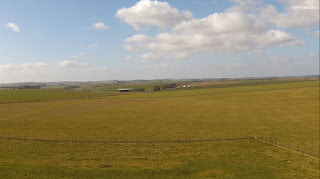