Unauthorised Development and a Hazard Warning at Stonehenge

In July 2015 Kate Davies, English Heritage's manager of Stonehenge (email:kate.davies@english-heritage.org.uk) of English Heritage put in a planning application to Wiltshire Council  (15/07038/VAR) to retrospectively vary the conditions imposed (S/2009/1527/FUL) when the New Visitor Centre at Airman's Corner was built.

As of 13 April 2016 this application has still not been approved, which as most of the variations to the conditions  have already been built means they are unauthorised development within the World Heritage Site.

The problem is that the Highway's Officer objects to the bus stop arrangements :

I object to the proposed arrangements shown on drawing 10110301-SK-154 in relation to the temporary path and hardstanding on the highway verge. This arrangement has been provided, and the application is retrospective in this regard. The hardstanding has been made in a gravel finish and presents a potential hazard for those boarding the buses which are being used to supplement the demand not catered for by the VTS facilities. I have previously drawn this issue to the attention of EH. The verge hardstanding is of insufficient length to adequately address the purpose for which it is used. It has previously been agreed with EH agents, Gardner Theobald, that the area be extended so that adequate space can be provided for up to two buses, and that a durable finish be applied. If EH want loose stone on their internal path leading to the highway, I have no objection to that. 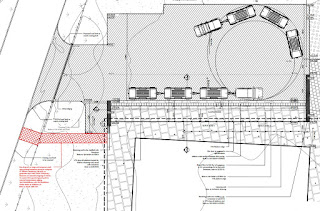 I have concerns about the details shown on drg 10110301-K-DT064L; the proposals appear to provide reinforced grass finish on the alignment of the byway, which is subject to frequent vehicular traffic and potential premature failure.


I hope for the safety of visitors and staff at Stonehenge this is resolved soon.


UPDATE: The planning application was passed on 13th May 2016 but to quote:

Note: Originally, this application was also seeking the following:

Revision to the approved Visitor Centre visitor transit system drop-off details to include bus drop-off
within A344 verge to north of the Visitor Centre shop;

Formation of short section of gravel path from the Visitor Centre shop to bus drop-off;

Replacement of approved grass surface path from external orientation area adjacent to the VisitorCentre to the A344 with temporary track surface;

however these proposals have been removed from the application following the receipt of consultation responses and will be added to a future planning application taking into consideration the objections received.


So the Bus drop off point and path that the returning visitors use has no planning permission and has been condemned by the Highways Officer as "a potential hazard".
Posted by Tim Daw at Wednesday, April 13, 2016