The Land Trains at Stonehenge - Background to Failure

At long last English Heritage have admitted that after over a year off the road the Land Trains aren't coming back to Stonehenge:

"Over time it became clear that the land trains were unable to cope with the daily demands of a site as busy as Stonehenge and English Heritage now intends to find new homes for them at other English Heritage sites," said a EH spokeswoman....There were problems with the land trains themselves – they were sent to a vehicle depot for much of 2015 for 'refurbishment', and one of the key problems centred around their manoeuvrability at the Stonehenge end of the journey. Drivers found the area where the old visitors centre was, next to the grassed-over former A-road, was too tight for the trains. The main problem was that at peak times, despite timed ticketing being introduced, they could not cope with demand."

This misses the fundamental cause of the problems with the Stonehenge VTS – the doors were put on the "wrong" side.

The manufacturers will have built them to EH’s approval so it would be unfair to blame them.

Looking at the plans and CGI of the proposed Land Trains (below) it is obvious that the passenger doors were meant to be on the passenger side. This would have allowed the trains to drive up to the platforms and even to the now abandoned proposal of a platform at Fargo Woods. Because the doors were the "wrong" side when delivered it meant the trains couldn't turn round in the compact turning areas and also get close to the platform. More details of the plans are in the planning application S/2009/1527 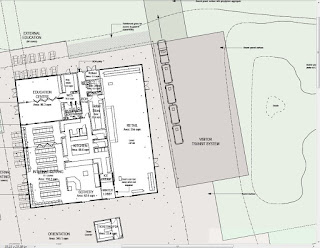 Visitors when the VTS was running will remember the large gap between the carriages and the platform. English Heritage will be less keen on remembering the injuries to visitors who fell into the gap. 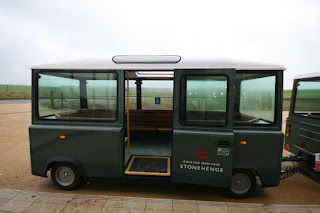 Actual carriage showing door and gap - from https://heritageaction.wordpress.com/2015/08/12/stonehenge-questions-3-ehs-train-of-thought/
Because the turning circles were too small (and square rather than the more usual round shape of a circle) the carriages had to dragged round which put a lot of strain on the wheels. Tyres were being replaced every few weeks and eventually the wheel hubs started to warp, wheel nuts failed, a wheel fell off, the brakes bound on causing dangerous overheating etc. There was no way that the Drivers or VOSA (the vehicle licencing authority) were going to let them return without major modifications.

I hope the trains enjoy a useful retirement at a more spacious property, or else I have some tomato seedlings that are looking for greenhouses.

Whilst it is a shame that it has taken so long for EH to admit a failure there is nothing wrong in them having tried. If you don't make mistakes you don't make anything. Google is always scrapping projects because they don't work as well as expected and that is part of their success. But to learn from failures you must admit them, learn from them and move on. You don't learn to kick penalty goals without thousands of less than perfect shots in practice, and analysing what you can do better each time.

The land trains were known to the staff (and happy younger visitors) as the Ninky Nonk, much to the management's annoyance. In happy memory of them here is the reason why.