More details are at http://www.sarsen.org/2012/07/stonehenge-resurrection-alignment.html and in my Stonehenge and the Winter Solstice leaflet.

By twisting the Great Trilithon across the main axis they cleverly acknowledged the two angles.

(Previous posts on this blog extensively examine whether Stone 56 was re-erected in the right place and whether 55 was in line with it - I'm happy that they both were. to the North East of the stone hole for the fallen Stone 55 there are two sarsen packing stones, which are marked on the plans below. The show how Stone 55 was in line with the re-erected 56 and provide further proof - see http://www.sarsen.org/2014/06/stone-55-alignment-and-original-position.html for details.)

The Altar Stone also lies at this twisted angle across the axis - see http://www.sarsen.org/2012/06/twisted-56-and-altar-stones-and.html    Of course we aren't sure if the Altar stone was originally in this position or not, but there is at least a possibility that it was. Quite a strong possibility I think.

To the north east of the Altar stone there are two post holes which we know little about, they may be part of a structure or simple post holes, further north of them has been so excavated in previous centuries we will never know. These posts are again on this same twisted alignment.

The outer Bluestone circle is badly damaged at the axis and largely unexcavated, but it seems to again be twisted to the alignment.

The end of the inner Bluestone Horseshoe has been damaged by the fall of the great trilithon. The central stone, stone 67 lies flattened on the ground but the two either side of it survive in damaged form.

The easterly stone, stone 66, has a tongue on it and the stump of it lies under the edge of Stone 55. I show pictures of it at http://www.sarsen.org/2014/05/an-extra-stone-at-stonehenge-is-spotted.html.

The westerly one, stone 68 has a groove down its length and stands leaning as shown in http://www.sarsen.org/2014/05/original-position-of-stone-68.html . Because of its lean it is mapped on the plan north of its original position. If it was restored to the vertical it would be further to the south.

The two stones define the shape of the end of the horseshoe. It was again twisted to the same Midwinter sunrise alignment.

The plans below show the main alignment down the middle, this is the famous solsticial one for the midsummer sunrise and midwinter sunset.

I have indicated these five possible twisted alignments, all of which point to the midwinter sunrise, and midsummer sunset.

None on their own is complete proof that this twist was deliberate, and some are more certainly original than others. But all the features that cross the main axis are either perpendicular or at this angle; an angle that was marked in other monuments of this age.

Cleverer people than I could do Baysian analysis of this but when something happens five times I recall the words of Auric Goldfinger; “'Mr Bond, they have a saying in Chicago: 'Once is happenstance, twice is coincidence, the third time it's enemy action.'”

Please click the plans to enlarge them. Plans are based on ones from Cleal et al. 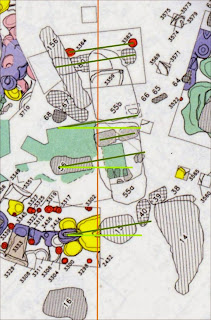 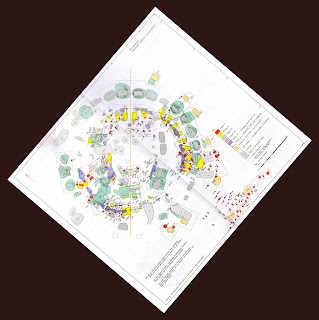 UPDATE - 17/5/14  Standing alone in Stonehenge yesterday it struck me that the alignment of 66 - 68  etc may just be aesthetic rather than alignments per se. When the Great Trilithon was upright and dominating the centre it would have looked odd if the smaller stones in front of it were not at a symmetrical distance in front of it. Thus these other alignments may be seen as confirmation that the Great Trilithon was erected at the angle observed above.
Posted by Tim Daw at Tuesday, May 13, 2014