The Sarsen Bridge by the Bluestonehenge in West Amesbury

In the first year of excavation of this site archaeologists originally thought that there might have been sarsen here (the material used for the large trilathons at stonehenge.) It wasn't for three weeks that they realised a massive lump of it was helping to support this bridge. 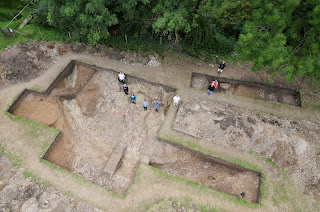 The Bluestonehenge archaeological team take up positions in the stoneholes, with the partially excavated henge curve in front of them. The small wooden overbridge and trackway to the Avon River is seen to the top left of the picture (Aerial-Cam photo, by Adam Stanford).
Posted by Tim Daw at Friday, February 24, 2012