It's very boring having to repeatedly point out that a Glacial Erratic only is evidence of glacial transport to the point where it was naturally deposited. If it has been moved by humans, and there are no records where from, then it adds nothing to the argument. If you don't know where the glacier left it, it don't mean a thing.

It is much more interesting to learn about the Keientrekkers (boulder tractors) of Amersfoort, NL 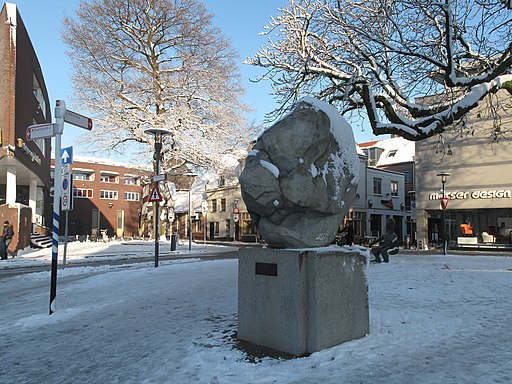 The history of the Amersfoort Kei from http://www.amersfoortfestivalstad.nl/keistadfeesten
In 1544 a 'grooten keeselsteen' was mentioned at the Waelberch on the road from Amersfoort to Utrecht. According to the folk tale, Jonkheer Everard Meyster made a bet with a number of friends that he would drive the people of Amersfoort so mad that they would pull the boulder from the Waelberch (near the Stompert near Soesterberg) to the city.
On June 7, 1661, 400 inhabitants of Amersfoort pulled the boulder on a sled to the Varkensmarkt. When the Amersfoorters realized that they had been stupid enough to put in effort for something that was completely pointless, they buried the boulder in 1672 on the Varkensmarkt.
Later generations were not ashamed of the incident. In 1903 the boulder was excavated there again and placed on the Utrechtsestraat. In 1932 the boulder was moved to Plantsoen-Zuid near the Arnhemsestraat. During the German occupation, the stone was temporarily buried on the Hof for fear of damage.
In 1954 the Amersfoortse Kei got a new and for the time being the last pedestal on the Stadsring..
In 1961, the Amersfoort middle class wanted to polish the city's image by setting up a boulder park. Since then, the city has been receiving a boulder as a gift from home or abroad for years...
For the boulders see: http://www.nedmex.nl/html/amersfoort/bouldergarden.html
Posted by Tim Daw at Thursday, June 23, 2022